The Alien World of Deepwater Research

Some of today's most fascinating science is deep underwater, but our technology comes up against its limits in these remote and frigid settings. 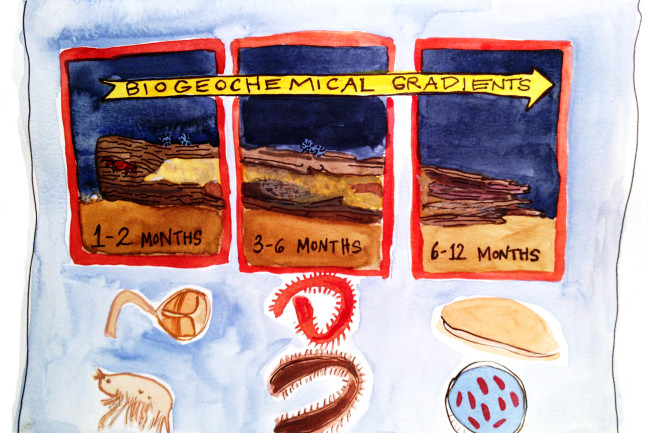 It’s an oft-repeated anecdote of ocean researchers that we know more about the moon than about the bottom of our own oceans. Humans meet our match when it comes to probing cold deep bodies of water.

We are drawn to the deep by its ancient mysteries, chilling down below. But we also come up against our limitations there, battling against equipment failure, aching cold, and the frontiers of technology.

Research in the deep reveals the sometimes-shy face of science that turns away from a soundbite-infatuated media: halting, meticulous, even serendipitous. Like space exploration, exploring the deep can be delicate and dangerous—a stage for human victories and heart-rending mistakes.

Just like the accidental discovery of penicillin years ago, science today sometimes still rides on the beauty of the “accident.” John Kleppe of University of Nevada-Reno fished Fallen Leaf Lake by his home for fifteen years before discovering it contained a preserved medieval forest in its depths. Intrigued by his fishing hooks getting caught on mysterious underwater objects, Kleppe sent down a submersible and discovered medieval trees that had started growing when the Magna Carta was written, some still standing upright at 100 feet tall on the bottom of the lake.

Further research, including manned submersible sampling and sonar analysis, has revealed the ancient shoreline that emerged during a 200-year megadrought in the Sierra Nevada between the 9^th and 12^th centuries, one of many going even further back in time, when precipitation in the area dropped dramatically and the lake level dropped to roughly 200 feet below its current level. During the drought, trees would grow on the newly exposed land, but they would quickly be drowned and sealed safely, as in formaldehyde, when the lake refilled.

Fungi, insects, and bacteria that normally erode trees on land are unable to degrade the trees in deep, very cold, low-oxygen water. Some of the trees have stewed in the lake for 800 years, and yet one researcher who sawed off a limb emerged from the water accompanied by the distinct smell of sap. All of the droughts recorded dwarf our 20^th century megadrought, which we fondly call the Dust Bowl, quickly cutting our dry and wet spells down to size.

Life Beneath the Ice

Another well-preserved depth lies in a very different climate—trapped under miles of ice. This foreboding depth is one of the most tantalizing underwater ecosystems we know of.

“Ecosystem” because, just in the last week, the first ever instance of life in a subglacial lake has been spotted. DNA tests hinted at the presence of life, and a look down the microscope confirmed it—live bacteria in the water from Antarctic Lake Whillans.

Whillans is part of an expansive subglacial lake system beneath Antarctica's ice, comprising an area comparable to that of the continental United States. A team of American scientists journeyed 1,000 miles across Antarctica to drill into the lake using a custom-designed pressurized hot water jet capable of melting 2,500 feet of ice in a few days.

It’s not yet known what kind of bacteria they’ve found or whether they are brand-new species. The microbes are, however, clearly living at the extreme limits of known life. Besides Antarctica, the only other water that exists concealed in the dark beneath thick ice occurs on the moons of Jupiter and Saturn. Learning about life in Lake Whillans could thus inform us about life on other planets.

The discovery builds on research done by Russian researchers at Lake Vostok, another Antarctic subglacial lake. The team completed drilling to the lake in February 2012. To avoid contaminating any samples, they drilled to the surface but no further, allowing the pressurized water to seek the path of least resistance and climb up the hole created by the drill, where it could be extracted.

Last month the team announced it had successfully retrieved a core of ice from the borehole without the contamination that had plagued their earlier samples. The next step will be to analyze the core for microbes and other signs of life, which, if found, will add a second member to this alien landscape in the deep.

Forty years ago when hydrothermal vents on the ocean floor were first discovered, scientists were amazed to find life where no sunlight penetrated, feeding off of sulfur gases. Since then we’ve learned that whale carcasses and fallen trees, known as “organic food falls,” are also able to sustain these sulfidic bacteria in the otherwise desert landscape that is the bottom of the sea.

What scientists haven’t known is how food falls get colonized. How do these tiny bacteria come to discover an isolated log in the middle of an oceanic food desert? Christina Bienhold and her team from Germany’s Max Planck Institute of Marine Microbiology sunk a bunch of logs to the bottom of the eastern Mediterranean Sea starting in 2007, and recently published the results of that study. They found that the wood was richly colonized with a diverse community of organisms within a year.

The first to come along and settle were the wood-boring molluscs Xylophaga dorsalis, which Bienhold and Co. are now deeming a keystone species in food fall communities. Like termites, they degrade the log through boring and digestion, opening up habitats for other organisms to colonize and processing the wood to make it potential food for other animals. The respiration of the molluscs creates a sulfidic zone, thereby attracting our bacterial friends who eat sulfides.

Other invertebrates come to feast on the smaller critters already in attendance: sea urchins, crabs, and, as the team discovered, two new kinds of worm—a species of bloodworm that feeds on small invertebrates, and a fireworm relative which acquired a new species and genus specification.

Bienhold and her team are helping to clarify how life travels around the ocean, and how amazingly well-adapted niche creatures can actually use organic-rich oases like whale carcasses as convenient stepping stones between vents which are few and far between.

In our planet’s northernmost reaches, a wholly different water story is emerging. Northern sea ice in the Arctic is receding at historic rates, and a live science experiment is underway: What exactly is this melt doing to the underwater environment?

A mini-observatory has been installed to shed some light. It’s modeled after the NEPTUNE and VENUS projects, the largest deep ocean observatory networks in the world, which extend the Internet out into the Northeast Pacific in order to gather data. Located in the ocean off Canada’s Nunavut province, the new observatory will monitor in real-time environmental factors like temperature, salinity and ice thickness.

It’s the first ocean-bottom network in Canada’s Arctic, and will relay information back to us in real time about exactly what is happening in this special, highly endangered ecosystem. Continuous data streaming back to Canada's University of Victoria will enable rapid responses in the choices we make about Arctic shipping and other human activities in the far north. The Arctic is a big laboratory, equipped with a new mini-observatory, where we are witnessing the largest indications of global climate change.