Thanks, Global Recession: You Made Carbon Emissions Drop a Little 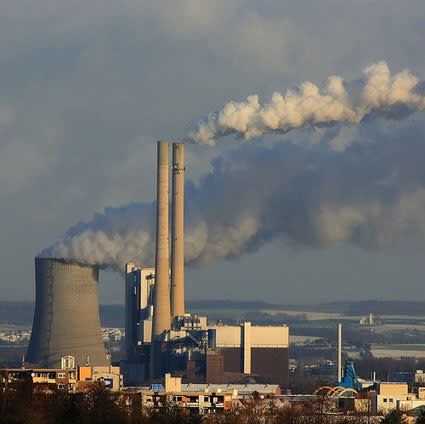 World carbon emissions fell by 1.3 percent in 2009, most likely due to the global recession, says a report from the Global Carbon Project published today in Nature Geoscience. Emissions were originally expected to drop further (about 3 percent, as estimated from the expected drop of world GDP), but China and India's surging economies and increasing carbon output countered the decreases elsewhere.

The largest decreases occurred in Europe, Japan and North America: 6.9% in the United States, 8.6% in the U.K., 7% in Germany, 11.8% in Japan and 8.4% in Russia. The study notes that some emerging economies recorded substantial increases in their total emissions, including 8% in China and 6.2% in India. [USA Today]

There is some good news from the report. It seems the atmospheric CO2 concentrations didn't jump as much as they were expected to, which means the world's carbon sinks were performing better.

While emissions did not fall much, the amount of CO2 in the atmosphere increased by just 3.4 gigatonnes – one of the smallest rises in the last decade. Friedlingstein says the land and marine sinks performed better in 2009, because the La Niña conditions in the Pacific meant the tropics were wetter, allowing plants to grow more and store away more carbon. [New Scientist]

Researchers believe that reforestation has had a positive impact on the world--newly-planted trees have been sucking up carbon from the air, says Pep Canadell, executive director of the Global Carbon Project.

The researchers also point out that the regrowth of forests in temperate regions has overcompensated for carbon dioxide emissions from land conversion outside the tropics. "In the temperate world, we're now planting more trees that we are cutting down," says Canadell. [CBC News]

2009's decrease in C02 emissions don't signal a broader trend: 2010 is looking to be a record-breaking year in the other direction as the world recovers from the recession. Some argue that the direct link between economic success and carbon emissions reveals a deeply dysfunctional system.

These two paradoxical years -- a 10 year low in carbon emissions one, and record-breaking output the next -- speak volumes about the nature of the global carbon-intensive economy. It demonstrates, yet again, how tightly carbon emissions are tethered to economic growth in the current development model. And it helps make the case, yet again, that we need to make major strides to bring emission levels down in industrialized economies (especially the US) and urgently rethink the development model -- which is, as of now, standard -- that relies on dirty fuels like coal to power growing economies. [Treehugger]

80beats: CO2 Emissions Are Rising. Or Falling. Actually, It’s Both.

80beats: When China Makes Goods for the US, Who’s Responsible for the Emissions?

DISCOVER: Forget Putting CO2 Under Rock—Let's Turn It *Into* Rock