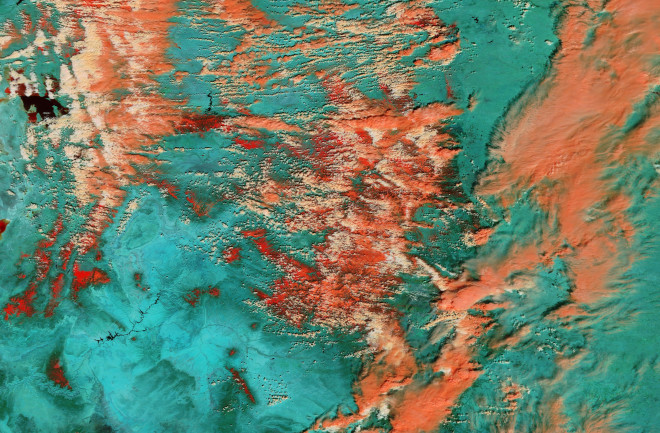 A false color image of much of the interior West of the United States captured on March 17th by the MODIS instrument aboard NASA's Terra Satellite. (Source: NASA EOSDIS Worldview) Maybe it's just because I'm such a geek, but I honestly think that if this image were framed and hung in a museum people would look at it and go, "Wow, what a beautiful painting." It's not a painting. You're looking at a delicious assemblage of pixels generated by the MODIS instrument on NASA's Terra satellite. The pixels, in delirious false color, comprise an image encompassing much of the interior West of the United States. The Colorado Rockies are visible, albeit obscured to a large extent by clouds. So are the Grand Canyon, the Great Salt Lake, and Flaming Gorge in Wyoming. Can you find them? Here are some details for my fellow remote sensing geeks: This is a Band 3-6-7 combination image, which is particularly good for discerning snow and ice. They appear bright red in the image. According to NASA, the more ice, the more red the color. Thick ice and snow show up in red-orange hues, whereas small ice crystals in high clouds are rendered reddish-orange or peach/tangerine. The widespread bright cyan color is indicative of bare soil. And liquid water on the ground — we're taking reservoirs, lakes, rivers, etc. — is very dark, almost black in fact. Lastly, sediments in water appear dark red. So here's what boggles my mind: An artistic drama like this plays out on the home planet every single day. And no canvas is ever the same.