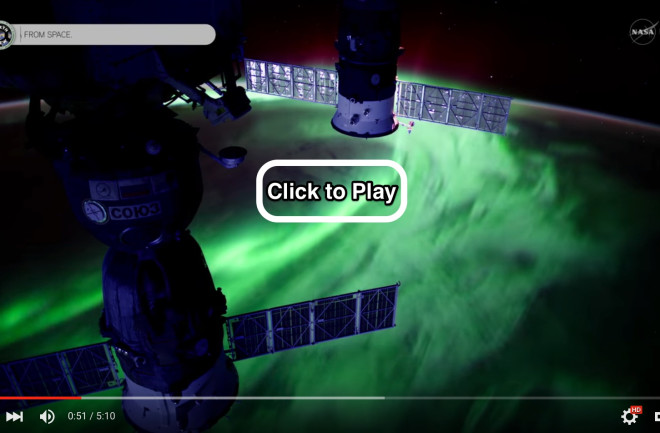 Screenshot from a compilation of ultra-high definition time-lapses of the aurora borealis shot from the International Space Station. (Video: NASA) The evanescent auroras that form shimmering curtains of light in the high latitudes of both the Northern and Southern hemispheres are stunning enough when seen from below. But from above, the spectacle is simply out of this world. Except it's not, really, since the aurora borealis in the north, and aurora australis in the south, are very much a part of our world. That's demonstrated quite dramatically in the compilation of time-lapse videos linked from the image above. The video is in ultra-high definition 4K. Even if you don't have a UHD monitor, it's still a stunner. In addition to numerous auroras, you can see the bright crackling of lightning at night; the orange glow of towns and cities helping to sketch out maps of the landscape below; and stars, constellations and galaxies turning in the heavens above. Most spectacular are the curtains of auroral light. If they seem akin to the glow of neon lighting, that's no coincidence. The same basic physical process are at work. In the tenuous upper atmosphere, energetic electrons spiral along Earth's magnetic field lines toward the poles. (We'll talk about the source of those electrons in a moment.) Here they crash into oxygen and nitrogen atoms, which understandably become quite hot and bothered. To put it more scientifically, some of these atoms' own electrons vault into higher energy states. But they don't stay there for long. Soon enough (within a fraction of a second) they fall back down, giving up their gained energy, this time in the form of photons — particles of light. As this happens over a vast scale, auroras are the result.

An artist's rendering shows Earth's magnetosphere being shaped and roiled by the solar wind — a stream of energetic particles emanating from the Sun. (Source: NASA) Vivid auroral displays can occur when Earth's protective magnetic bubble, called the magnetosphere, is roiled by particles and magnetic energy streaming out from the Sun. The illustration above can help you visualize this. As the wind of solar particles hits Earth's magnetosphere, visualized with those blue lines, they divide like water streaming around a rock in a stream. At the same time, that solar wind sculpts the magnetosphere, compressing it where it faces the Sun, and causing it to elongate into a magnetic tail, or "magnetotail," on the opposite side.

The IMAGE satellite captured this animation of the aurora australis, also called the southern lights, on September 11, 2005. The ring of glowing auroral light over Antarctica occurred four days after a powerful solar flare hurled plasma towards the Earth. The IMAGE observations of the aurora have been laid over NASA’s satellite-based Blue Marble image. (Source: NASA Earth Observatory) Electrons tend to build up in that tail. And when a strong enough burst of solar material and associated magnetic energy smashes into Earth's magnetosphere, those electrons can start spiraling in toward Earth — along those blue lines in the illustration above. As you can see, those lines of magnetic field emanate from the poles (just as the lines of magnetic field do in a bar magnet). So the electrons spiraling in from Earth's magnetic tail tend to get funneled toward those regions, where they excite the atoms of oxygen and nitrogen, causing the aurora borealis in the north, and aurora australis in the south.

A screenshot of an animation of images from the Solar and Heliospheric Observatory, or SOHO, shows an eruption of plasma exploding into space from the Sun. (Source: ESA/NASA/SOHO) The largest geomagnetic storms occur when explosions on the surface of the Sun throw billions of tons of plasma along with magnetic field out into space. These coronal mass ejections, or CMEs, often occur in association with solar flares. Click on the screenshot above to watch an elongated filament of plasma exploding out into space in late April of 2015. The animation consists of images from the SOHO spacecraft. In the actual animation, the white circle in the center represents the size of the Sun. An "occulting disk" was used to block out the Sun so that the exploding filament and resulting coronal mass ejection could be seen.