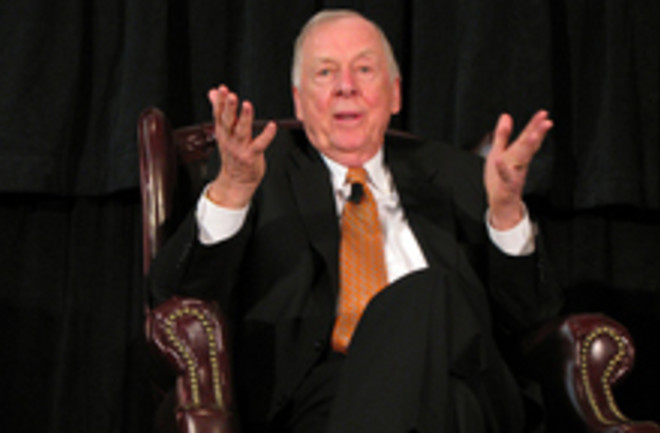 What a difference a year makes. In July 2008, Texas billionaire T. Boone Pickens offered up the "Pickens Plan" to end U.S. dependence on foreign oil by producing more electricity from huge wind farms, and running vehicles on natural gas instead of gasoline. To kick-start the transformation, Pickens announced that he would construct the biggest wind farm ever in Texas.

Now, one year later, Pickens has declared that he's canceling the enormous Texas wind farm for the foreseeable future, and is scrambling to figure out where to place the 687 wind turbines that he already ordered. (He may end up establishing five or six small wind farms in the Midwest, Pickens suggested.) The project was largely done in by major problems with

Pickens's decision to pull the plug on his ambitious project highlights the troubles faced by the wind power industry in general of late.

With credit costlier and harder to come by, and oil and natural gas prices down sharply over the past year, the nation's nascent wind industry may begin to focus on smaller projects that are closer to major population centers rather than massive developments like 81-year-old Pickens envisioned, industry officials said. "You've got an industry that is kind of hanging on by its fingernails," said Denise Bode, chief executive of the American Wind Energy Association [Reuters].

Related Content: 80beats: Wind Turbines Could Theoretically Power the Entire World, and Then Some 80beats: U.S. Approves Offshore Wind Turbines (Even if They Block Kennedy Views) 80beats: Wife of Billionaire T. Boone Pickens Plots to Save Wild Horses From Slaughter