https://www.youtube.com/watch?v=Vzjh2z0CHTM&feature=youtu.be At one point, the swirling cyclone in the animation of weather satellite images above was producing winds of hurricane strength. Luckily, as it neared shore it weakened. Even so, it brought heavy rain to British Columbia on Wednesday, Sept. 24. Here's what it actually looked like from the shore:

Thanks to the Weather Network for this video. The false-color images that comprise the animation at the top of the post were acquired by the GOES-15 satellite. They show the water vapor content of the atmosphere. (Check out the Satellite Blog of the Cooperative Institute for Meteorological Satellite Studies, source of this animation, for more imagery.) I find the animation quite beautiful. But I have to remind myself that the storm brought high winds to the area of California being ravaged by the mammoth King Fire, complicating firefighting efforts. As I'm writing this early on Thursday morning, the blaze has consumed almost 93,000 acres. 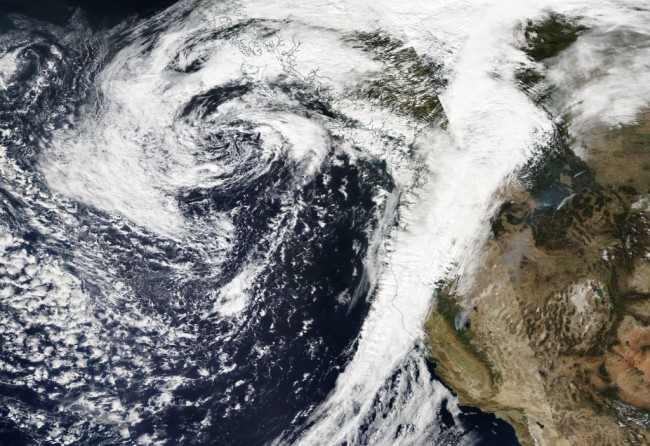 A strong cyclone is seen spinning off the coast of British Columbia in this image captured by NASA's Aqua satellite on Sept. 24, 2014. (Source: NASA) NASA's Aqua satellite captured the image above of the storm on Sept. 24th. If you look carefully at the lower right quadrant of the image you should be able to spot the smoke plumes from the King Fire, which at first was whipped up by the winds. But later, the storm brought cooler weather, rain and higher humidity to the region — all a welcome turn of events for firefighters.