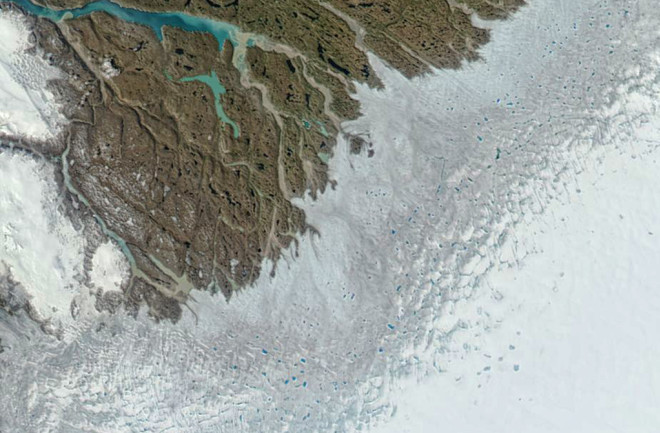 Numerous melt ponds are visible in this image of Greenland's southwest coast, captured by NASA's Aqua satellite on June 12, 2016. The grayish-blue band also is indicative of melting at the surface. (Source: NASA EOSDIS) With parts of Greenland experiencing record high temperatures of late, melting of snow and ice at the surface has been skyrocketing. This follows a record low extent of Arctic sea ice in May, and other troublesome signs that global warming is taking off in the high north. The satellite image above of Greenland's southwest coast shows what's happening at the surface: numerous blue melt ponds, and the telltale grayish-blue coloration indicative of melting snow and ice. (Make sure to click on the image for the full-size version.)

Surface melting of surface snow and ice in Greenland has spiked dramatically in recent days. It is, by far, the largest of three surges in melting seen so far this year. (Source: NSIDC) The graph above tells the tale: a spike in melting far in excess of the average melt percentage for this time of year, following on from two earlier spikes in May and April. It has already been an extraordinary melt season in Greenland — one that began very early. The first spike evident in the graph above came so early in the year that it prompted a Danish climate scientist to say that she and her colleagues were “incredulous." The second spike was even bigger, prompting Ted Scambos of the National Snow and Ice Data Center to say that "the Arctic is going to go through hell this year."

SEE ALSO: Second dramatic spike in thawing on the Greenland ice sheet heralds an early start to the melt season

Source: NSIDC Now, we've got a third melting spike that blows the others right out of the water. Overall, what's happening in Greenland looks very similar to what occurred in 2012, when surface melting during the warm season was far in excess of any earlier year in the satellite record, which dates to 1979. Click on the thumbnail at right for a graph of the melt extent that year. It's no secret why snow and ice is melting at such a rapid clip in Greenland right now: soaring temperatures — and not just in Greenland but throughout the Arctic:

Departures from average temperature on Sunday, June 12, 2016. (Source: ClimateReanalyzer.org) Last Thursday (June 9), temperatures in Nuuk, Greenland’s capital, reached 75 degrees F. That was the the warmest temperature ever recorded in the Arctic country during June, according to Jason Samenow of the Washington Post. "It was warmer in Nuuk than it was in New York City, where the high was only 71 degrees," Samenow writes. The warm season is still young, and it's possible that the situation could change significantly. But I wouldn't bet on it. All signs point toward an extraordinary year of warmth and melting in the high north.