Supreme Court to Decide: Is Global Warming a "Public Nuisance"? 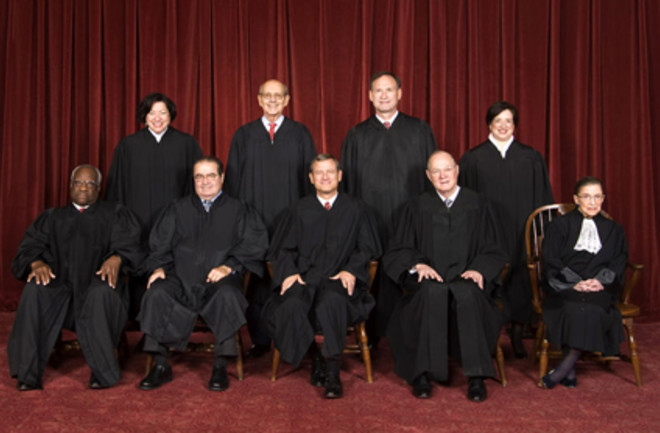 Yesterday, the Supreme Court agreed to hear what could be the most important environmental case it will decide this year: Huge power companies like Xcel Energy and Duke Energy are appealing a ruling by an appeals court that they can be sued under public nuisance law. If that ruling is confirmed at the highest level, it could open the door to a flood of lawsuits claiming the power companies' greenhouse gas emissions constitute a nuisance to the general public. This one has been a long time coming. The case, brought by eight states including New York and California plus some environmental groups, dates back to 2004. First a federal judge threw out the states' claim, essentially saying that emissions should be dealt with in legislative bodies, not courtrooms. Then the appeals court reversed that ruling, recognizing the eight states' claim that these emissions contribute to global warming and could be considered under public nuisance law, prompting the power companies to balk and appeal.

In their appeal, the companies argue that the states lacked the legal right, or standing, to sue because they can’t show that they were harmed by anything the utilities did or that they would benefit from a ruling against the power companies. “A court is not a regulator and may not enter relief against a particular defendant where the plaintiff’s injury is not traceable to that defendant and where relief against the defendant would not redress that injury,” the companies argued. [Bloomberg]

Public nuisance laws, the energy companies argue, are far too vague to apply to greenhouse emissions.

“The ramifications of this [appeals court] holding, if it is allowed to stand, are staggering,” wrote Peter Keisler in a brief on behalf of the six power companies. “This litigation seeks to transfer to the judiciary standardless authority for some of the most important and sensitive economic, energy, and social policy issues presently before the country.” The lawyer added: “Virtually every entity and industry in the world is responsible for some emissions of carbon dioxide and is thus a potential defendant in climate change nuisance actions under the theory of this case.” [Christian Science Monitor]

Indeed, public nuisance is a weird legal avenue through which to target greenhouse gas emitters. But with Congress unable or unwilling to act on climate, states and environmental groups are looking to laws already on the books to make their case. Three years ago the hot strategy was suing the EPA: The 2007 Supreme Court decision in Massachusetts v. EPA

said that the Clean Air Act gave EPA the authority (and the obligation) to regulate greenhouse gases from the transportation sector. Now, the avenue for the Supreme Court

to consider is public nuisance.

According to one of the environmental groups that brought the case, Open Space Institute, the appeals court's ruling set a "major precedent in that it gives citizens -- in the absence of climate change legislation -- the right to take action against big business pollution." [AFP]