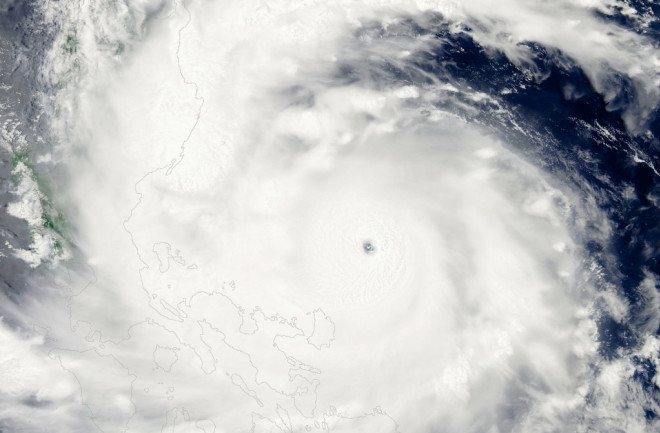 NASA's Terra satellite captured this image of Typhoon Utor approaching the Philippines on Sunday, Aug. 11, 2013. (Image: NASA) | Updated below with new information about landfall. | Super Typhoon Utor — the most dangerous tropical cyclone of 2013 so far — has slammed ashore on the northern Philippine Island of Luzon. According to a dispatch from Reuters, Utor's maximum sustained winds at landfall were about 130 knots, or 150 miles per hour. At sea, the storm was pushing up waves as high as 40 feet, according to the Joint Typhoon Warning Center, which categorizes the storm as a "super" typhoon. | Update 8/12/13, 9:15 a.m. MDT: There are conflicting reports of Utor's wind speeds when it made landfall, with some news outlets reporting maximum sustained winds of 110 miles per hour. Regardless, Utor (known as Typhoon Labuyo in the Philippines) is being blamed for two deaths so far, and 44 fishermen are reported missing. Moreover, accounts of severe damage from the storm are coming in, particularly in the town of Casiguran. See the video below of a news report from the town, where officials are reporting that almost 80 percent of the infrastructure has been destroyed. Prior to landfall, the storm strengthened as it swirled across warm ocean waters, and through an environment with low wind shear. The image at the top of this post was captured by NASA's Terra satellite on Sunday as Utor, with a well developed eye, was approaching the Philippines. The typhoon came ashore as a category 4 storm on the Saffir-Simpson scale. For comparison, Hurricane Katrina was a strong category 3 storm with maximum sustained winds of 125 miles per hour when it made landfall in Louisiana on Aug. 29th, 2005. Category 4 storms are capable of enormous destruction. From the National Hurricane Center:

Catastrophic damage will occur: Well-built framed homes can sustain severe damage with loss of most of the roof structure and/or some exterior walls. Most trees will be snapped or uprooted and power poles downed. Fallen trees and power poles will isolate residential areas. Power outages will last weeks to possibly months. Most of the area will be uninhabitable for weeks or months.

Here's a news report from the town of Casiguran, which appears to have been very hard hit by Utor: http://www.youtube.com/watch?feature=player_embedded&v=VmbrOr96w00#at=129 Residents of the Philippines are only too familiar with the devastation that tropical cyclones can bring. Just last December, Super Typhoon Bopha killed 1,901 people there, which made it the world's deadliest weather disaster of 2012, and the second worst typhoon in Philippines history, according to Wunderground.com meteorologist Jeff Masters.