Sunshine-Powered Plane Takes off for a 24-Hour Test Flight 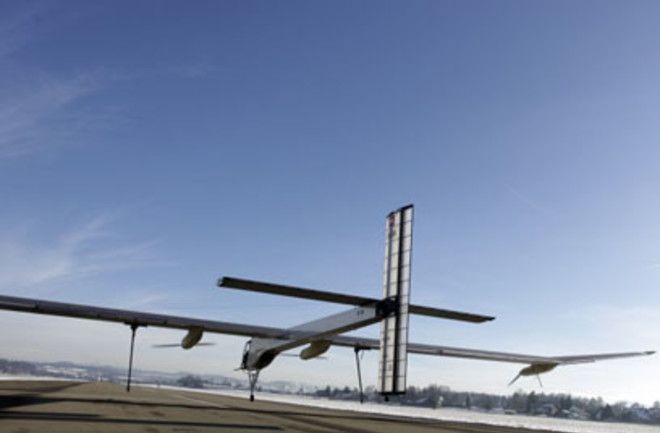 As I write this, a plane powered by the sun is flying somewhere over Europe, undertaking its most ambitious test flight yet. When we last left the Solar Impulse back in April, the experimental aircraft had flown a two-hour test to prove it was flight-worthy. Today, the pilot in the plane, which weighs about as much as a car and is covered in 12,000 solar cells, will try to stay aloft for 24 hours, even cruising along during the nighttime hours.

"The goal of the project is to have a solar-powered plane flying day and night without fuel," said team co-founder Bertrand Piccard, adding that this test flight - the third major step after its first 'flea hop' and an extended flight earlier this year - will demonstrate whether the ultimate plan is feasible: to fly the plane around the world. "This flight is crucial for the credibility of the project" [AP].

Piccard's team wanted to fly a little closer to the summer solstice last month, but technical problems left them grounded. With the bug in the communications system now sorted out, pilot Andre Borschberg took off from Switzerland at about 7 a.m. local time. When night falls in Europe—sometime later this afternoon U.S. time—Borschberg will have to decide whether he's managed to save enough energy to fly through the night. If so, he'll bring the plane down from an altitude of nearly 28,000 feet to just about 5,000 and hold steady, waiting for the dawn so he can land.

"For seven years now, the whole team has been passionately working to achieve this first decisive step of the project," said pilot Andre Borschberg as he entered the cockpit at an airfield in Payerne, in the west of Switzerland...

"The big question is whether the pilot can make efficient use of the battery energy to fly throughout the night," the team said in a statement [BBC News].