Sunken Ship Redux: Wreckage May Do More Harm than Good 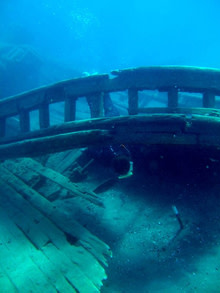 Yesterday we wondered whether the U.S. Navy's plan to intentionally sink some of its old warships, so that they'd become new homes for fish and attractions for recreational divers, would be such a great idea in the long run. Today, a new study looking at a different shipwreck suggests that not only might intentionally sinking old ships be a bad idea, but officials might have to remove shipwrecks from sensitive ecosystems before they cause too much harm. Back in 1991, a 100-foot-long ship sank in

It is a corallimorph, a relative to anemones and corals that clears out competitors with it stinging tentacles. Rhodactis is an invasive species to the Palmyra Atoll, and it doubled its presence between 2006 and 2007, pushing out the diverse mix of corals that is native there. The research team, led by Thierry Work of the U.S. Geological Survey, says the corallimorph's drive to take over might be fueled by its love for the iron leaching from the sunken ship. Like most marine organisms, Rhodactis needs iron to grow, as does the algae with which it has symbiotic associations. Finding so many of these corallimorphs near the high-iron areas, the researchers write, means that it might be better adapted to take advantage of the extra iron than the native corals are. Not everyone is convinced: Other researchers not involved in the study told New Scientist that the shipwreck may have just killed off Rhodactis' competitors, allowing it to thrive. Still, sticking to their iron hypothesis, Work and his team say we need to deal with these iron-leaching shipwrecks. Workers could manually remove wreckage from the water, though the researchers say that besides being a daunting undertaking, that could spread Rhodactis even further. But the other option—chemically treating the area where the invader lives in order to sterilize it—makes us wary, too.