This before-and-after animation of images acquired by the the Landsat 8 satellite shows just how dramatic flooding has been along the Irrawaddy River in Myanmar (Burma). Source: NASA Earth Observatory We live on a dynamic planet, so we shouldn't be surprised when rampaging floods and raging fires cause a great deal of misery at the same time. Still, the floods and fires documented by satellites in recent weeks are pretty dramatic. So I thought I'd share some satellite imagery of the phenomena. In Myanmar (formerly known as Burma), hot and dry weather in May of this year has given given way to catastrophic flooding during one of the worst monsoon seasons in decades. The extent of flooding along the Irrawaddy River, the biggest in Myanmar, is dramatically evident in the before-and-after animation of satellite images above. You're looking at the Magway region of Burma. For a Google Maps satellite view showing the location of the animation, click here. The before image was acquired on Aug. 29, 2013. Note the braided nature of the river, and the brown sand bars and islands, where vegetation is mostly absent. The after image was captured on Aug. 3, 2015. Those sand bars and islands disappear beneath a veritable sea of blue.  The images are actually composites of natural and false color, both from the Landsat 8 satellite. The brilliant blue shows water in false color. This was done, according to NASA's Earth Observatory, because sediment in floodwaters often makes it difficult to distinguish between land and water. Use of false color for water shows its true extent clearly. The Magway region is not the only area of Myanmar to suffer. Extensive flooding has affected more than a million people in Myanmar, and has killed more than 100 people, according to reports (here and here) quoting the government. In excess of 1.2 million acres of rice fields are reported to have been inundated, with 430,000 acres destroyed. And Burma is not alone in its flood-borne misery. Flooding and a landslide resulting from heavy monsoon rains killed more than 100 people in India and forced tens of thousands of people to flee from their homes earlier in August. 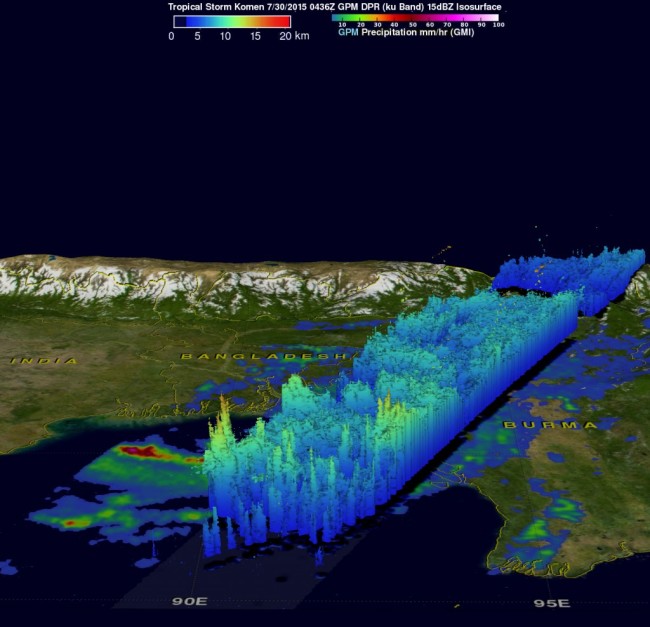 On July 30, the Global Precipitation Measurement satellite saw cloud tops above 9.9 miles high in bands of thunderstorms towering high over the Bay of Bengal and wrapping into the center of Tropical Storm Komen as it came ashore in Bangladesh. (Source: NASA) In both Burma and India, the situation was made worse by Tropical Storm Komen. See the graphic above for how the clouds looked to the Global Precipitation Measurement satellite. Meanwhile, far to the north in Russia, wildfire has been creating a different kind of misery around the achingly beautiful Lake Baikal in Siberia. 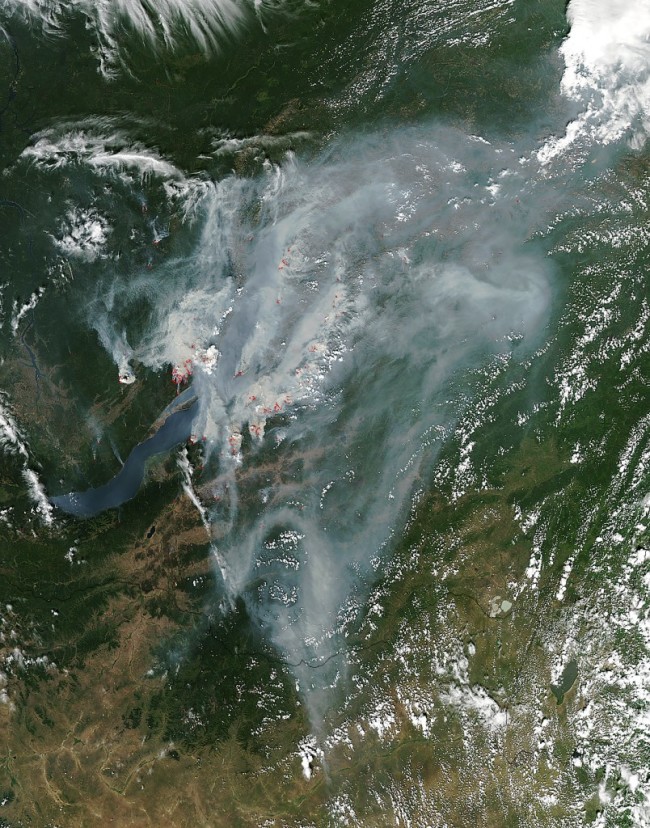 Wildfires burning around Lake Baikal in Russia are visible in this image acquired by NASA's Aqua satellite on Aug. 8, 2015. (Source: NASA Earth Observatory) The image above shows a broad region, with thick gray smoke billowing up from numerous wildfires around the lake. (Look for its bluish water toward the middle left of the image.) Areas where the Aqua satellite's Moderate Resolution Imaging Spectroradiometer (MODIS) detected active burning are marked in red. Here's a description of what's going on, from NASA's Earth Observatory:

According to news reports citing Russia’s federal forestry agency, fires in Siberia had burned 1,400 square kilometers (540 square miles) as of August 12. Many of the fires were in southern Siberia, particularly in Buryatia and Irkutsk. Straddling those two areas is Lake Baikal. According to the Siberian Times, vacationers reported ash on the lake and on camp sites, and more than 40 people were evacuated.

One interesting scientific note: The fires appear to have been so vigorous and hot in one area that they caused towering pyrocumulonimbus clouds to billow up.

Smoke from wildfires near Russia's Lake Baikal as measured on Aug. 9 and 10, 2015 by the Suomi NPP satellite. (Source: OMPS Blog/NASA) These giant fire clouds occur when intense heating of the surface causes currents of air to rush upward, carrying water vapor and ash with them. Everything cools as it rises higher, causing water vapor to condense onto ash particles. And as this happens, a cloud resembling that of a thunderstorm forms. The satellite images above, acquired by the Ozone Mapping Profiler Suite (OMPS) on the Suomi NPP satellite, show this event and its aftermath. The false colors indicate where the instruments detected aerosols in smoke from the Siberian wildfires. The image on the left was acquired on Aug. 9, 2015, and that pink area shows where the fire cloud likely occurred. (Also of note: The smoke aerosols in that spot actually went right off the end of the scale on that day!) The image on the right shows the aftermath, with smoke seen drifting far to the east — all the way to the Pacific Ocean, in fact.