Study: Huge Swath of Louisiana Wetlands Will Inevitably "Drown" by 2100 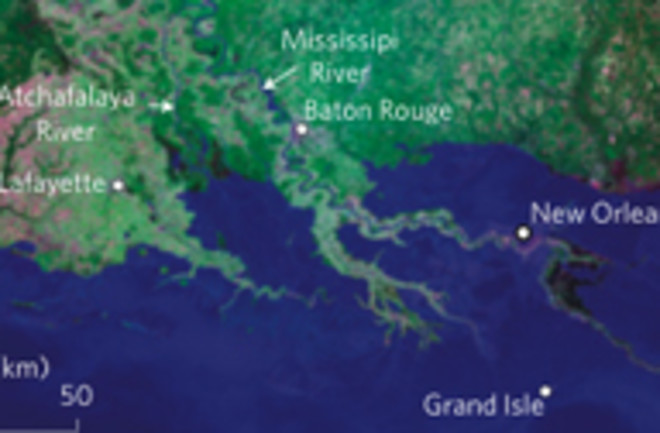 The state of Louisiana is losing its coastal wetlands to the Gulf of Mexico, and a new study suggests that conservationists won't be able to turn the tide.

If engineers don’t divert sediment-rich waters from the Mississippi River to help replenish a sinking river delta, about 10 percent of [the] state will slip beneath the waves by the end of this century. However, even if the engineers do try to abate the subsidence, the Mississippi doesn’t carry enough sediment to offset more than a small fraction of that loss, a new analysis suggests [Science News].

Before American settlers subdued the Mississippi and its tributaries, the river periodically overflowed its banks and spilled muddy water, thick with sediment, into surrounding wetlands. But the new study found that the

Mississippi and Atchafalaya rivers today carry only half the sediment they did a century ago -- between 400 million and 500 million tons a year then, compared with just 205 million tons today. The rest is now captured by more than 40,000 dams and reservoirs that have been built on rivers and streams that flow into the main channels [The Times-Picayune].

So even if Louisiana officials embark on an all-out campaign to restore the marshes through controlled levee breaks and diversion projects that bring back river water, it wouldn't be enough to save the land--especially since sea levels are rising due to global warming.

"We conclude that significant drowning is inevitable" [The Guardian]

, the study's authors wrote. In the study, published in Nature Geoscience, lead researcher Harry Roberts argues that Louisiana officials are going to have to triage. He says

officials would have to choose which parts of the landscape could be saved and which must be abandoned, and to acknowledge that lives and businesses would be disrupted. Instead of breaking levees far south of New Orleans, where relatively few people live, Dr. Roberts said, officials should consider diversions much closer to New Orleans.... “It’s going to be an excruciating process to decide where that occurs,” Dr. Roberts said [The New York Times].

The coastal marsh is a rich ecosystem that plays a role in the lifecycle of shrimp and many other commercially valuable species, and offers a stopping point for migrating birds. The land also serves as a hurricane buffer for more populated inland areas, as the marshes absorb some of the storm surge. But according to the researchers' gloomy prognosis,

the cause of "restoration," as efforts to build new wetlands and barrier islands are termed -- creating the impression that wetlands lost over the last 70 years can be reclaimed -- is a lost one [The Times-Picayune].