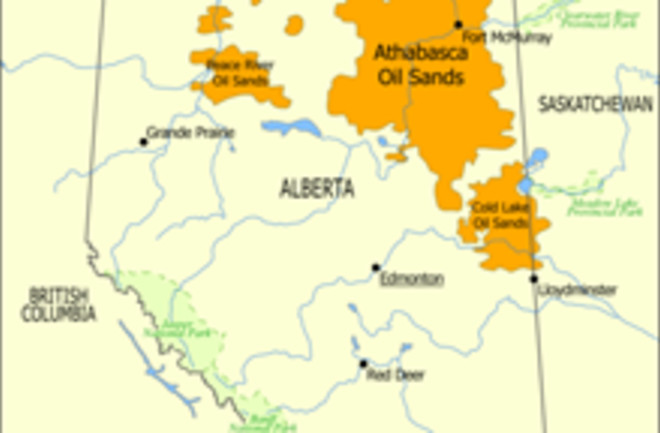 Mercury, arsenic, lead, cadmium, nickel, zinc—they're all getting into the waters of northern Canada in dangerous amounts because of mining in the oil sands, according to a study coming out in the Proceedings of the National Academy of Sciences. Canada's oil sands hold an estimated 13 percent of the proven oil reserves in the world, and the United States grows increasingly reliant upon them to meet our petroleum needs. However, the process of extracting and refining the oil is energy-intensive, and dirty. An industry-led group called Regional Aquatics Monitoring Program (RAMP) oversees the pollution coming from oil sands exploration, and it has maintained that elevated levels of toxins in the nearby Athabasca River system come from natural oil seepage. However, the University of Alberta's Erin Kelly and David Schindler say in their study that no, it's the oil exploration that's increasing the concentration of these elements in the water.

The researchers collected water from more than 35 sites in February and June 2008 along the Athabasca River, its tributaries, the Athabasca Delta and Lake Athabasca. They accumulated winter snowpack from 31 other sites in the region in March 2008. The researchers chose sampling sites upstream and downstream from oilsands mining, with both within 50 kilometres of oilsands developments and near undeveloped oilsands sites [CBC].

The upstream samples and the samples from spots that weren't exposed to oil sands mining didn't show the same rise in toxic pollutants. But the concentrations the scientists found downstream are higher than the maximum levels that Canada and the Province of Alberta set to protect marine life. The problem, Schindler says, in that those toxins can accumulate in animals.

"I don't think the concentrations alone are dangerous. I worry about some of them, like mercury, because there, parts per trillion translate into parts per million in fish," he said [Reuters].

Meanwhile, some of the companies that mine in the oil sands region are trying to devise new ways to keep their operations within regulation, given the billions to be made in oil exploration there. Shell last week announced a plan to tackle tailings ponds, a toxic byproduct of extracting and refining oil there.

Tailings ponds are expansive man-made lakes that hold water, leftover bitumen, clay and heavy metals from the oil sands production process. They are a major source of friction in the battle over the environmental impact of developing Canada's oil sands, the largest crude source outside the Middle East [Reuters].

, as well as several other prospective ways to reclaim the material from tailings ponds. For more about the oil sands, check out the September issue of DISCOVER, now on newsstands. Related Content: DISCOVER: Why We'll Never Run Out of Oil

80beats: Should We Allow a Massive Oil Pipeline from Canada to Texas?