Study: Americas + Europe + Asia Will Form Amasia, a Supercontinent in the Arctic 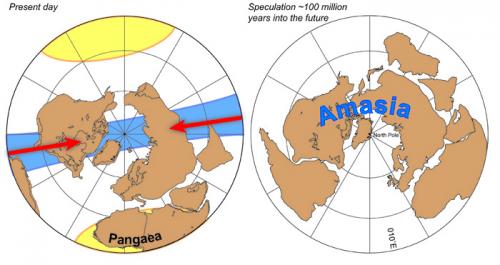 Geological analysis suggest the current-day continents we know and love will drift together, forming a new supercontinent like ones that existed many millions of years ago. What's not certain is where that supercontinent will be. The authors of a new Nature study suggest that the next supercontinent, dubbed Amasia, will join together up in the Arctic. Antarctica, though, would stay by its lonesome in the south. The Yale scientists analyzed the formation of two earlier supercontinents, Rodinia and Pangaea, and found that the continents had rotated 90 degrees between one supercontinent and the next one. They calculated these rotations based on the alignment of magnetic material in ancient rocks. Before lava solidifies into rock, the tiny shards of magnetic material point to align with the Earth's North Pole at the time---a magnetic snapshot of the past that can tell us how continents have since rotated. Rotate 90 degrees away from the last supercontinent, Pangaea, and that puts Amasia near the North Pole. However, this contradicts previous models proposing that Amasia will be either exactly where Pangaea was or directly 180 degrees across from it. Of course, none of us will be around to verify any of these hypotheses: According to the new model, Amasia is not due to emerge for another 100 million years. http://youtu.be/b75e3Uqtgwk [via CS Monitor] Image and video courtesy of Ross Mitchell, Nature