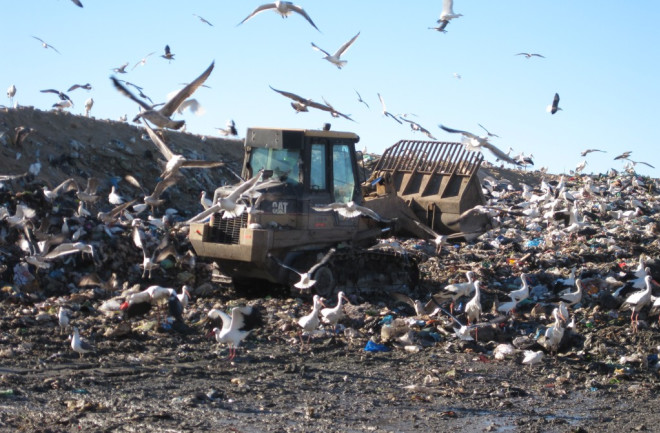 A front-end loader disturbs a swarm of feeding storks. (Credit: Gilbert et. al/University of East Anglia) In recent years, more and more migratory storks have been stopping at landfills for a snack during their voyages. Now, it seems that some have decided to make the dump their permanent home. It's hard to fault the storks for wanting to stop for a meal — after all, they travel over a thousand miles from Europe to Northern Africa and back again every year. The mouth-watering smell of a garbage dump is certainly alluring, and the temptation proved too hard to resist for some storks. Instead of flying on to their habitual breeding grounds further south, some elected to rest their wings and snack at the landfill all year long. It's the equivalent of stopping at a McDonald's during a holiday road trip, and then staying there.

Between 2012 and 2014, researchers from the University of East Anglia tracked 48 white storks at five different landfills in Portugal, which is at the midpoint of their yearly migration route between Europe and Africa. They attached GPS trackers and accelerometers to 48 birds nesting near the landfills to measure their behavior over the winter. The instruments allowed them to track the birds' location and what they were doing at any given point in time. Researchers could, for example, tell if they were flying, feeding or mating at any given point in time. They found that storks chose to build nests and breed near landfills, essentially setting up an expatriate community known for its fine dining. The birds appeared to be quite attached to their chosen feeding grounds as well: Instead of choosing to hunt near their nests, some birds flew as far as 30 miles just to get their beaks full of some delicious refuse. Researchers published their findings Wednesday in the journal Movement Ecology.

This behavior isn't new. A 2010 study of birds in Poland found storks foraging on landfills dating back to 1999, likely because human activity had made food scarce in the region. But this is the first time storks have been observed establishing nests near landfills, breaking a pattern of migration that likely extends back centuries. The behavior makes sense, the researchers say. For storks, the decision to migrate involves weighing the benefits of moving south to find plentiful food sources, or staying put and establishing a better nest for the next season. In Portugal, the storks seem to have found a way to do both. The storks' days of having their garbage and eating it too may be numbered, however. Government officials in Portugal are debating whether to construct new landfills that process trash indoors — out of storks' reach. This may pose a problem for the birds, the researchers say, as they are accustomed to finding easy meals at the landfills, and they may face resource shortages in their traditional territories. It seems that storks, too, have trouble laying off the junk food.