Clear, simple and compelling: a visualization of the rise in our planet's average temperature from 1850 to the present 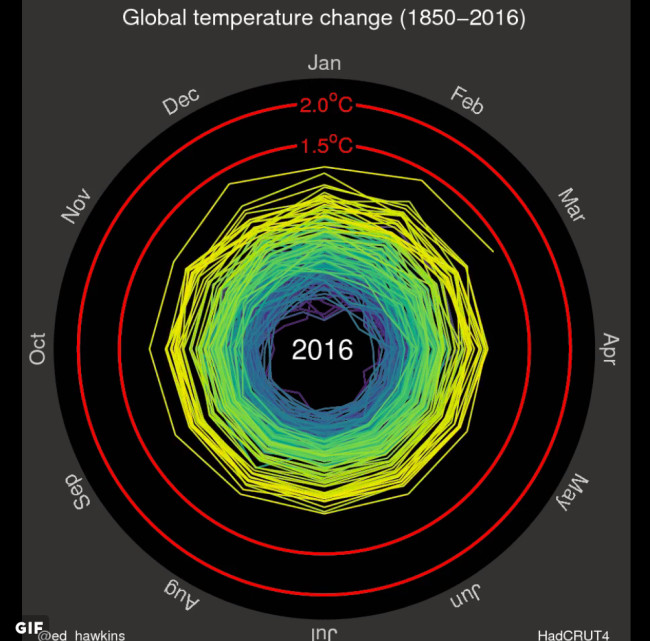 Courtesy Ed Hawkins. Graphic shared under a Creative Commons Attribution-ShareAlike license. I spotted this animated visualization over at the Washington Post's awesome Capital Weather Gang site today, and I found it so compelling that I had to share it here at ImaGeo. Click on the graphic above to watch the animation on Twitter. Credit goes to Jason Samenow at WashPo for jumping on this. Check out his article here. Climate scientist Ed Hawkins posted the visualization itself to Twitter yesterday. We start in 1850, the beginning of the HadCRUT4 climate record used by Hawkins, with a circle representing how the Earth's average surface temperature compared that year to the overall mean of 1850-1900. As the visualization progresses, one circle builds on another — each one a different color representing a single year. The expansion of the circles represents the warming of the Earth over time. But it doesn't happen steadily. In some years, the circle contracts a bit, representing a bit of cooling. In others, the expansion is notably significant, representing an acceleration of warming. That's particularly evident in where the visualization winds up: March of 2016. Trace the line back to July of last year. Notice how warming has taken off? 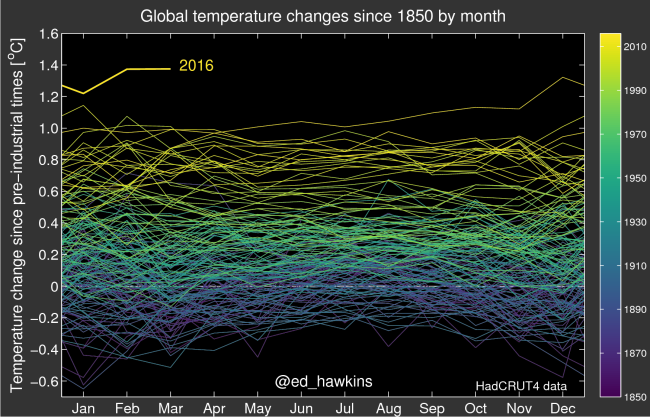 Courtesy Ed Hawkins. Graphic shared under a Creative Commons Attribution-ShareAlike license. You can see the recent dramatic warming in this graphic too, featured in another post by Ed Hawkins. The blog where he has posted these and other terrific graphics is called Climate Lab Book. It is an experiment in 'open source' climate science, "written by climate scientists, but open to anyone to see and comment." The goal is to "promote collaboration through open scientific discussion, and to improve our understanding of our evolving climate. Success would be a single, collaborative paper as a result of discussions on this blog." Great stuff. So make sure to check it out. And while you're at it, have a look at the Capital Weather Gang too. I go there every day, sometimes more than once.