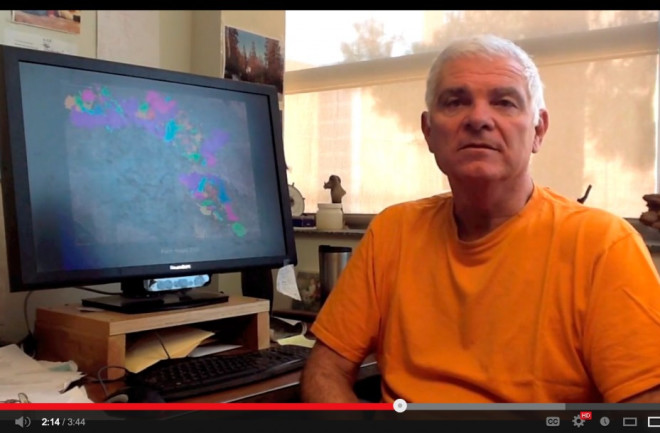 Screenshot from a video interview of Richard Minnich, a fire ecologist at the University of California, Riverside, discussing wildfire in Southern California. Click on the image to watch the video. (Video: UCR Today) Yesterday, I posted a story with a telling satellite image showing the partial ring of wildfires that have occurred in Southern California this year, including the Mountain Fire that has consumed thousands of acres in the San Jacinto Mountains. Today, in my reporting for a second story, I came across something I found amazing: A year ago, and again just a few days before the Mountain Fire began burning, a researcher at the University of California, Riverside, named Richard Minnich predicted that the area was one of three where big fires was likely to occur. And he was very specific, naming a town right at the edge of the fire as being at high risk. Before we get into Minnich's research, and how he made his prediction, a caveat: This isn't a fully reported article. I stumbled on his work well after the work day was over, so I haven't had an opportunity to interview him. But I will email him to see whether he wants to elaborate on anything I include here. For now, think of this as a kind of open, digital notebook — a way for me to share some of what I learned today in the course of my reporting. That notebook entry starts with a video of Minnich, a fire ecologist, discussing Southern California wildfire behavior, and how better management practices could help lower the incidence of very large fires and reduce risks. The image up top is a screenshot from the video. Click on it to watch it. In the video, Minnich explains that a century of fire suppression has resulted in wildfire behavior that is not at all natural for the region — and poses great risks. "Huge fires in Southern California are now the new normal in Southern California," he says. "But they do not have to be." Of course this statement is relevant to much of the West, not just Southern California. And I think that what he has to say can help us understand some of the reasons why we've gotten ourselves into such a wildfire predicament throughout the West. But keep this in mind: There are important differences between each region, and each kind of wildland ecosystem. The specifics of the situation in Southern California may not be the exactly the same somewhere else. So with that said... In the 19th century, fires in Southern California spread slowly and posed low risks. A particular patch of ground in the region would naturally burn every 30 to 60 years, according to Minnich. But now, thanks to fire suppression, and vigorous efforts to stamp out small fires, that patch may go an additional 30 to 100 years before it sees a fire. That part of the story is pretty familiar: Fire suppression leads to a build up of very large fuel loads — in this case, within chaparral and forests in the mountains of Southern California. And that has selected for large and intense wildfires fanned by extreme weather conditions. In the video, Minnich also describes how these management practices have caused a dramatic shift in the wildfire season itself: "In Southern California, fires formerly burned in summer and often burned for a couple of months at a time, on and off, not continuously, until they would finally be extinguished by rains in the fall," he says. With fire suppression, fewer blazes have a chance to get going that early. But after weeks of hot and dry summer weather, and then the arrival of extreme conditions — namely Santa Anna winds — fires finally do have a tendency to get going, and with greater intensity than in the past. As a result, Southern California's fires now occur later in summer and into the fall, according to Minnich. Of course this year, wildfire season got off to a rip-roaring early start — in May. (See my previous post for a list of the fires and the acreage burned.) The reason: Winter precipitation was only half of normal this year. So by May, conditions were already more like those of mid-summer. Given that lack of precipitation, predicting that fire was likely to start earlier than usual in Southern California was pretty much a no brainer. But Minnich was able to do something that in retrospect seems pretty amazing, at least to me: Point to the San Jacinto mountains and say, far ahead of time, that they were at high risk of a large wildfire. Here's what he said in June of 2012, quoted in an article by UCR Today (a publication from UC Riverside's public affairs office):

Idyllwild and Pine Cove are on the edge of the Mountain Fire, which has scorched 27,531 acres in the San Jacinto Mountains since last week, destroying seven homes and 23other structures. (Rain has helped firefighters get a handle on the blaze, which is now 91 percent contained.)

How did he make such an accurate prediction? Check out the map:

The color coding in this map shows the time of the last fire in Southern California's San Bernardino and San Jacinto Mountains. The areas colored in blues and purples have burned in the last 10 to 20 years. Areas in warmer reds, yellows and oranges, have not burned in up to 100 years. For the full legend of what each color means, click here. (Image: Minnich Lab, UC Riverside) It shows areas that have burned in the mountains north and east of Los Angeles between 1863 and 2009. The areas colored blue and purple have burned in the last 10 to 20 years. These are unlikely to see a large wildfire for awhile. By contrast, areas coded in yellows, oranges and reds haven't burned in 50 to 100 years, or even more. So they've had many decades to build up large fuel loads. The San Jacinto Wilderness, where the Mountain Fire has been burning, is in one of those red areas. Minnich has a prescription for reducing the risks (go to 3 minutes and 40 seconds into the video):

The long-term solution to burning in Southern California is to accept that fire is inevitably going to occur in these landscapes. So the saying is, 'It's now or later.' And later is a bad option, but we've been practicing later for a hundred years. If we were more relaxed and had a more rational policy of turning over the fuels of Southern California in a regular way instead of through catastrophic burns, we would actually have a much safer Southern California.

Backing off the fire suppression model that has caused the dangerous changes in fire behavior is, of course, easier said than done. And using more controlled burns to reduce fuel loads can be an even harder sell, especially since they are not risk free. (Embers from a controlled burn in Colorado were fanned into the deadly Lower North Fork Fire, which killed three people and destroyed 27 homes.)

If these policies are to win wider acceptance and do the job, it might help if development within the wildland-urban interface could be done in a more rational manner that kept homes out of the riskiest areas.

That will be the subject of my next story, which I hope to post by Friday.