South Asia’s Vultures Back From the Brink 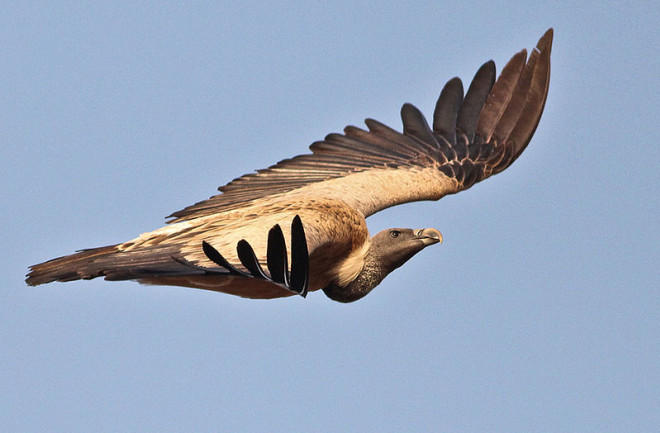 A long-billed (Indian) vulture (Credit: Vaibhavcho, CC) Unlovely, unloved and utterly necessary for controlling disease and stabilizing ecological health, vultures are under attack around the world. In Africa, populations of a half-dozen species are nearing collapse due to a combination of human-caused killings ranging from poaching for bushmeat and religious objects to the deliberate poisoning of poached elephant carcasses to destroy the circling scavengers. In southern Asia, and particularly in India, the chief villain has been a nonsteroidal anti-inflammatory drug called diclofenac, widely used to treat arthritis symptoms in cattle and water buffalo. Diclofenac causes acute kidney failure in vultures feeding from the carcasses of recently treated livestock, and has caused catastrophic declines in all three species of vulture populations in the genus Gyps, including the white-rumped, the long-billed and the slender-billed vultures; the first of these listed species declined by more than 99.9 percent between 1992 and 2007, with tens of millions of individuals dying across South Asia.

The severity of the crisis can’t easily be overstated. In the 1980s, there were as many as 80 million white-rumped vultures, Gyps bengalensis, in India. It was recently the most numerous bird of prey in the world. Yet only a few thousand survive today, making its fall the fastest population collapse of any bird species in recorded history—including the dodo. The importance of vultures in maintaining the public health of overpopulated regions like South Asia and sub-Saharan Africa cannot be overstated. Every species of both Old and New World vultures play critical roles in maintaining ecosystem health—including the control of disease outbreaks—by devouring the rotting carcasses that all animals (even us) inevitably leave behind.

At least 60 vultures died in January 2015 after feedling on a dead cow near Pani Dihing Bird Sanctuary in Sivasagar, India. (Credit: © Luit Chaliha/Barcroft India) Vultures don’t generally target live prey but act as altruistic scavengers feeding on the corpses of recently killed animals (even vultures portray disgust when confronted by badly decomposed remains). The acid bath in their stomachs is highly corrosive, facilitating the digestion of decomposing carcasses infected with deadly diseases such as anthrax, cholera, botulism and rabies that would be agonizingly lethal to most other scavengers. And despite their cadaverous appearances, vultures are actually very hygienic animals. Naked or lightly feathered heads and necks keep vultures clean as they dig deep into the entrails of decomposing livestock and wildlife, discouraging bacterial adhesion and keeping their exterior remarkably clean.

Vultures maintain sanitary and functioning ecosystems in South Asia, and a number of public health problems are directly attributable to their disappearance. Booming populations of feral dogs feast on unclaimed carcasses, increasing the spread of brucellosis, distemper and rabies. Underprivileged herders are also accumulating debts because they now must pay to have dead livestock buried or burned — a job vultures did for free. Hindus — who don’t eat beef — comprise 80 percent of India’s population. While this sanction apparently doesn’t spare Indian cattle the horrors of their factory-farmed Western brethren, it does create something of a dilemma when it comes to the safe disposal of tons of reeking flesh; of the estimated 500 million cattle in India, only 4 percent are consumed by people. Cattle that die natural deaths were traditionally taken to a rural area where vultures and other scavengers would strip them to the bone. Without vultures, this pileup of unconsumed dead meat creates the ideal breeding ground for deadly contagions, most commonly rabies. Rabies is the tenth most common cause of death from infectious disease worldwide, with estimated 50,000 to 60,000 people dying rabies annually, with 20,000 to 30,000 deaths in India alone. A 2008 study in the journal Ecological Economics led by Anil Markandya of the University of Bath estimated that rabies cases attributable to the vulture decline cost the Indian economy $34 billion from 1993 to 2006. “India has the highest rate of human rabies infections in the world,” the study found, “and dog bites are the main source. Over 95 percent of human deaths due to rabies are due to dog bites.”

Vultures had previously consumed around 12 million tons of unwanted, rotting cow and water buffalo meat each year; now this enormous mass of protein rots away in blazing heat, under empty skies. The Ecological Economics report admirably cites an obscure cultural disaster stemming from the vulture implosion: the severe curtailing of an ancient religious practice custom of “sky burial” performed by Parsi Zoroastrians and certain Himalayan sects within Vajrayana Buddhism. The deceased are fully deboned by their relatives and their flesh and organs are ceremoniously carried to dakhma, hilltop stone “towers of silence” where hungry vultures reconstitute the dead into a new form. Parsis believe that the classical elements of fire, air, water and earth are sacred and not to be profaned; burial or cremation of human bodies pollutes the earth, and therefore Parsis have for centuries have relied on aerial purifiers to recycle their dead. For the continuance of Indian cultural hallmarks ranging from the veneration of cattle to sky burial, much has depended upon healthy vulture populations to reduce the threat of disease outbreaks from accumulations of decaying livestock carcasses. With vultures practically extinguished through the ingestion of diclofenac, the potential for severe disease outbreaks has vastly increased for both humans and wildlife.

In what is being hailed as a major breakthrough, late last year the government of India issued an immediate ban of all multi-dose vials of human formulations of diclofenac, which had been outlawed for veterinary use in 2006 but which has since been illegally used to treat livestock. Captive-breeding programs in India, Nepal and Pakistan are bolstering vulture numbers as diclofenac works its way out of the environment. Between 2005 and 2009, research biologist Rhys Green and his team from the University of Cambridge examined over 6,000 organ samples taken from Indian livestock carcasses, finding that diclofenac levels had decreased by 50 percent while levels of meloxicam—another veterinary anti-inflammatory that’s not toxic to vultures—rose by 44 percent.

A white-rumped vulture. (Credit: © Goran Ekstrom) But the seeping spread of diclofenac now threatens other vulture populations, with several European countries—including Spain, home to 90 percent of Europe’s vultures—recently approving the drug’s importation and use. A Eurasian griffon vulture, Gyps fulvus, that died in 2012 was recently found to likely have been a victim of diclofenac ingestion, and conservationists are pushing for a total ban of sale and use across the EU.

South Asia’s vultures are still in the very early stages of recovery. “Vultures reproduce slowly and so any process like this is likely to take years. A good comparison may be California condors—there were approximately 22 in the wild when they were pulled (brought into breeding programs) in the 1980s and there are now several hundred, but that takes millions of dollars of captive breeding effort,” says United States Geological Survey biologist Todd Katzner. There are also troubling signs of continued illegal use of diclofenac and the potential for another veterinary drug called nimesulide, as related last spring in the conservation Oryx. There, Richard J. Cuthbert of the Royal Society for the Protection of Birds and his colleagues found that, “The proportion of Gyps vultures found dead in the wild in India with measurable levels of diclofenac in their tissues showed a modest and non-significant decline since the ban on the veterinary use of diclofenac." As one problem is addressed another is revealed; such is the nature of conservation in the Anthropocene. Financial, political and social influence must be brought to bear for these magnificent and ecologically crucial birds to survive, and to aid in our own survival. It is hoped that in the coming years, Asian skies will again be shadowed—and Asian soils scoured—by renewed generations of these scavenger angels, brought back from the grisly threshold of extinction.