Something really crazy is happening in the Arctic

At a time when sea ice should be expanding, it's actually shrinking

Changes in the concentration of Arctic sea ice between Nov. 12 and 19, 2016 are seen in this animation of satellite data. The North Pole is at the center. Areas with 100 percent coverage of ice are depicted in white. Lighter to darker blue tones are indicative of decreasing concentrations. And areas with no ice are in gray. Ice actually decreased within the area circled in red in the first frame of the animation. (Data: University of Bremen. Images: Polar View. Animation: Tom Yulsman) Sea ice in the Arctic has been trending at record low levels since the third week of October — and now, something really crazy is happening up there. The Arctic is heading into the dead of winter, and across a vast swath of territory, the polar night has descended, with 24 hours of darkness each day. This is when temperatures should be plunging, and sea ice should be expanding rapidly. Instead, temperatures are soaring, and sea ice is actually shrinking.  This shouldn't be happening. https://twitter.com/ZLabe/status/800476632066592768 To be clear, sea ice is growing in some areas. But since Nov. 16th, the overall trend has been downward. That's largely because sea ice has been contracting significantly in the Arctic Ocean adjacent to the island archipelagos of Svalbard and Franz Josef Land. You can watch it happen in the Tweeted animation above, and also in the animation at the top of this story. Both are based on data acquired by the AMSR2 instrument aboard Japan's GCOM-W satellite. 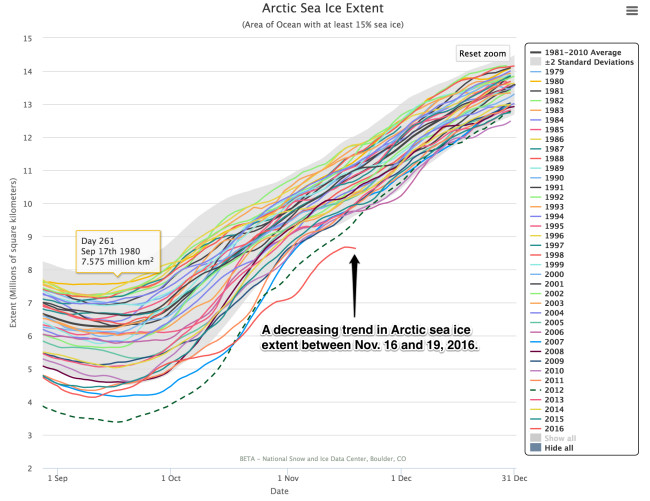 Arctic sea ice extent is charted here for each year since 1979. This year's extent was already trending at record-low levels. Now, ice coverage has stopped expanding completely — and has begun to shrink. (Source: NSIDC) What the heck is going on? Against the backdrop of human-caused global warming — a phenomenon that has caused the Arctic to warm twice as fast as any other region on Earth — the region is having a particularly difficult time cooling down this winter. As Bob Henson puts it in an in-depth story titled "Crazy Cryosphere" at Weather Underground's Category-6 blog:

Temperatures north of 80°N smashed records for warmth throughout the winter of 2015-16. Now they’re on an even more torrid pace.

Here's one way to think of what's happening: Natural variation has long brought both cooler and warmer than average temperatures to the Arctic in all seasons. But now, we humans are putting our finger on the scale, tipping the balance in favor of excess warmth. And right now, we're talking crazy warm: 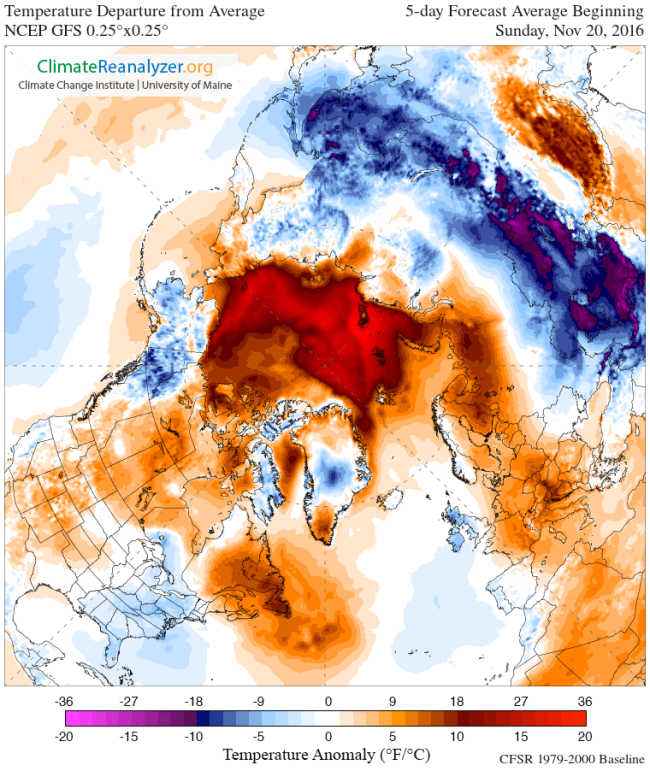 Temperature departures from normal, as forecast by the GFS weather model for the five-day period beginning Sunday, Nov. 20. (Source: Climate Reanalyzer/University of Maine) In the map above, the brightest red tones are indicative of temperatures that are more than 35 degrees Fahrenheit warmer than normal. For areas of the Barents Sea near Svalbard and Franz Josef Land, that has meant above freezing air temperatures near the surface. A complex set of factors seems to be at play. Back in August, two large storms in the Arctic helped break up sea ice and may have stirred up warm water from the depths, according to Ted Scambos, a senior research scientist at the National Snow and Ice Data Center. This helped drive Arctic sea ice to a near-record-low in September.

In fact, record lows have been set for Arctic sea ice on 160 days so far this year, according to Zack Labe, a PhD student studying Arctic climate at the University of California at Irvine. https://twitter.com/ZLabe/status/800437627912491008 This means vast swaths of the ocean surface were exposed to sunlight for a longer period than normal. Ice is very effective at reflecting solar energy. But dark surface waters absorb it readily. So water already warmed by the stirring action of the storms was able to get warmer still, thereby hindering formation of sea ice. Now, those waters are giving off some of that energy to the atmosphere, probably accounting in part for the unusual air temperatures at the surface right now. At the same time, atmospheric circulation patterns have been pumping warm air into the region from the south, apparently slowing the cool-down of ocean waters. The result: a truly bizarre situation in the Arctic. Meanwhile, a large portion of Eurasia has been crazy cold and snowy. You can see this in the blue and purple colors in the temperature anomaly map above. As Bob Henson of Category-6 explains:

It’s as if the hemisphere’s entire allotment of chilly, snowy weather has been rounded up and consigned to one area, albeit a big one. For this, we can credit or blame what’s called a “wave one” pattern, where the upper-level circulation around the North Pole is dominated by a single elongated loop, shunted in this case toward the Eurasian side.

Meanwhile, at the other pole, Antarctic sea ice is also trending at record-low levels. Head over to Henson's post for more details about that. Here's the link again: http://bit.ly/2eUJrG1