Solving the Mystery of 'Slow Quakes'

Geologists investigate why some earthquakes drag on for months, instead of mere seconds. 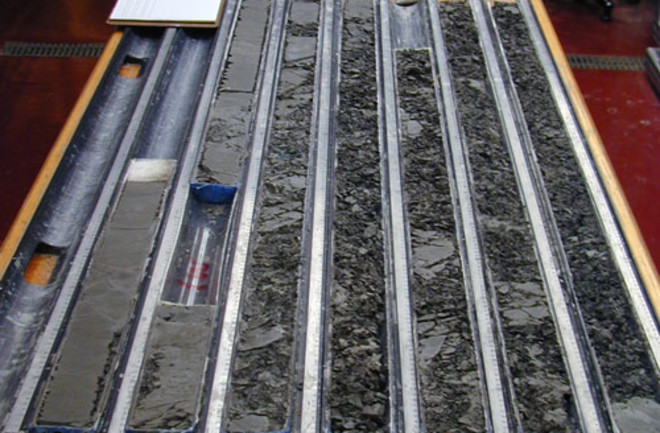 Core samples were arranged in the order in which they were drilled. Those at the left were closest to the surface; those at the right were from deeper in the seafloor.  | Demian Saffer/Pennsylvania State University

New Zealand’s largest earthquake of 2013 hit the country’s second-most populated area — and nobody felt a thing. No buildings collapsed, no roads buckled, not a single teacup toppled off a shelf.

The quake, equivalent to magnitude 7 on the Richter scale, stretched out over months, and only the most sensitive seismic instruments picked up the tectonic action near Wellington. Geologists are keen to understand whether these “slow earthquakes” are merely leaks of tectonic pressure, like the hiss of air from a punctured tire, or warning signs of a more dangerous, fast-moving temblor.

“Until slow earthquakes were observed 10 to 15 years ago, conventional wisdom held that faults either released energy slowly and steadily by creeping, or would store tectonic stress until they failed catastrophically,” moving at a rate of about 3 feet per second, says Demian Saffer, a geophysicist at Pennsylvania State University. In the past decade, more sensitive equipment has allowed geologists to detect earthquakes that creep at rates measured in inches per week, like the one in New Zealand. But so far, no one can explain why these slow earthquakes happen or what they portend.

Core samples were arranged in the order in which they were drilled. Those at the left were closest to the surface; those at the right were from deeper in the seafloor.  | Demian Saffer/Pennsylvania State University

To learn more, Saffer and three colleagues investigated slow movements along a fault off the Japanese coast. They drilled 1 kilometer beneath the seafloor to extract a dozen dark-gray, clay-rich sample cores, each about the size of a soda can, from the fault. Back at the lab, they shaved 1-millimeter wafers from each core and sheared the slices between two steel blocks, at varied velocities, to simulate a fault slipping in a long, controlled motion. The rock’s response to these pressures surprised Saffer.

Initially the clay resisted the sliding motion, and then it slowly began to weaken. In an actual fault, the rock would be stationary under growing tectonic pressure, then would slowly give way. Although it’s not completely clear why the rocks held and released energy this way, Saffer believes the flatness of clay particles and the way clay absorbs water are part of the answer. Knowing that clay-rich rocks can release tectonic energy in a controlled way could explain how a fault might creep along, he says, and might help scientists predict a fault’s next move.

[This article originally appeared in print as "Let's Take It Slow"]