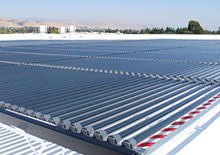 A previously secretive solar energy start-up has revealed the details of its cutting edge technology, and has declared itself as a major player in the new solar industry. The company, Solyndra,

says it has orders for $1.2 billion worth of its solar panels over the next five years. It has raised more than $600 million and already has 500 employees.

And it plans to construct a second, larger plant in [California] next year [San Jose Mercury News].

its panels aren’t exactly the industry standard; where almost all others on the market look like a flat sheet of dark material, Solyndra’s panels resemble a row of long fluorescent light tubes, each an inch wide and an inch apart [VentureBeat]

. The company says that by coating the tubes with thin-film voltaic cells, it has made more efficient solar energy collectors.

"With a cylinder, we are collecting light from all angles, even collecting diffuse light," says CEO Chris Gronet [Scientific American].

The company wants to see its solar panels installed on rooftops across the land, and says that its system will be cheaper to install than traditional solar panels.

Because Solyndra's tube panels are lighter and allow wind to pass through them easily, there is less construction needed in terms of rooftop anchoring or shoring up a roof for significant weight-bearing [CNET].

They also don't have to swivel to face the sun, as some traditional panels do. These features make the technology a perfect fit for big-box stores and office buildings, says Gronet:

"There's over 30 billion square feet of large, flat commercial rooftop space (in the United States). If we covered that with our solar panels, that would generate 150 gigawatts, enough electricity to generate power for 15 percent of U.S. homes" [San Jose Mercury News].