Carrie Arnold is a freelance science writer in Virginia. She blogs about the science of eating disorders at www.edbites.com, and frequently covers microbiology topics for national magazines. 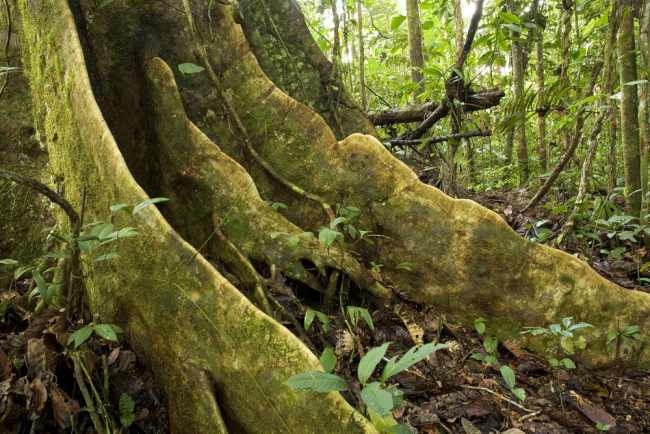 Conservationists like to think large. Whether it’s identifying hundreds of square miles of Himalayan highlands as a tiger corridor or creating massive marine preserves, these scientists are definitely thinking on the macro scale. However a small but growing group of scientists are beginning to think smaller when it comes to conservation—much smaller. They have begun to study the microbes living in the soil, and their results are showing just how important microscopic life is in the macrobiotic world. A healthy, diverse population of soil microbes results in a healthy, diverse ecosystem. Changing an ecosystem also changes its microbes, scientists have found, and this may permanently scar the environment. “Soil is not sterile,” said Noah Fierer, a microbiologist at the University of Colorado at Boulder. “These microbes are crucial to maintaining soil fertility.” Biodiversity underfoot Deep in the rainforest at the Amazon Rainforest Microbial Observatory (ARMO), scientists from around the world are analyzing the effects of land use on the population of soil microbes. In effect, ARMO is actually located where the Amazonian rainforest used to be: like one-third of all the local land and a growing swath of rainforest, the area has been logged and is now pastureland. Ecologists have noted the loss of rare trees and flowers, and of the indigenous wildlife. But Jim Tiedje of Michigan State University and colleagues have been studying the loss of microbial life due to deforestation. Tiedje’s first hints that deforestation might have a chilling effect on soil microbes came from reports of areas that had been logged and then allowed to return to rainforest. These areas, researchers noted, had significantly lower levels of plant diversity than untouched forest. The explanation, Tiedje suspected, was that deforestation had removed important microbes from the dirt. Without these microbes, the plants might not be able to grow in the nutrient-poor Amazon soil. To test this hypothesis, Tiedje and colleagues took 12 samples from the pastureland surrounding the ARMO and 12 samples from the nearby pristine rainforest. From these, the researchers isolated and analyzed the microbial DNA to identify the number and type of bacterial species. Pastureland soil samples, the researchers found, had roughly 400 bacterial species per sample, compared to 350 in the rainforest samples. But though the pasture area didn’t have fewer bacterial species, it did lack another important aspect of species diversity. Whereas two samples of rainforest soil produced very different combinations of bacterial species, the pasture soil did not. It was as if every burger joint in New York City had been converted to a McDonald's: Although the total number of restaurants remains the same, they all become the same chain, selling the same limited number of items. A vital source of diversity is lost when species (and burgers) become homogenous. In the Amazon, deforestation and agriculture are to blame for this homogenization. “This loss of diversity could be problematic,” Tiedje said, although scientists haven’t yet studied the specific relationships between soil microbes and reforestation. “We need to establish in what way [soil microbial diversity] might make a difference.” A more thorough census Pasture and rainforest, however, are only two of a multitude of environments around the world. Fierer and colleagues recently surveyed

the identity and function of soil microbes from 16 sites around the world, including three hot deserts, six Antarctic cold deserts, and seven samples from a range of other sites, including temperate and tropical forests, grasslands, and tundra. Fierer’s team measured microbial diversity in a different manner than Tiedje and colleagues. The microbial census taken by Tiedje and colleagues was a basic head count. It was much as if the U.S. Census stopped collecting data after obtaining a person’s name. This is useful and important information, to be sure, but it doesn’t tell researchers much about what the microbes do and how they function. So Fierer and colleagues assessed microbial diversity by identifying the functions performed by the various bacteria – for instance, performing photosynthesis, or converting carbon into a useable form. In census lingo, the data reported people’s occupations rather than their names. The researchers found that the diversity of microbial functions in the soil was directly related to plant biodiversity aboveground. Tropical and temperate forests, which are known to host a wide range of species, had the most diversity of bacterial functioning. The cold Antarctic deserts, in contrast, ranked lowest in its range of microbial occupations. What’s more, these areas had very little redundancy in the species of bacteria performing these jobs. These results indicate that environments like the Antarctic, with a limited number of microbial species, are more fragile than tropical and temperate rainforests. Besides being an indicator of current biodiversity, soil bacteria could also play an important role in shaping the formation of new species. Biologists since Darwin have known that geographic barriers like rivers and mountains can create new species by dividing an existing one in half. But results from these studies indicate that soil microbes might also play an important role in the process, since new plant species can’t establish themselves in an area without the proper bacterial species. “Our study is very descriptive. The work is very similar to 18^th century plant science – we’re just grabbing samples from totally different ecosystems and seeing what’s going on in the soil,” Fierer said. “The microbes in soil represent a large portion of the biomass in an ecosystem, and we don’t know much about them.” Image courtesy Dr. Morley Read /Shutterstock