Snowpack declines in the western U.S. are comparable to all of the water stored in the West's largest reservoir

This animation of Landsat images shows Lake Mead near its highest and lowest points over the past 32 years. The high-water image was acquired on May 15, 1984; the low-water image on May 23, 2016. (Images: NASA Earth Observatory. Animation: Tom Yulsman) Thanks in large measure to warming temperatures, the average snowpack in U.S. western states has dropped by 15 to 30 percent since 1915. The water in that lost snowpack is comparable in volume to Lake Mead. With a maximum capacity of 9.3 trillion gallons, Mead is the West’s largest manmade reservoir. The new data on snowpack declines are among the striking results of a study led by Philip Mote, director of the Oregon Climate Change Research Institute at Oregon State University. As part of the study, Mote and his colleagues analyzed measurements from 1,766 snow-monitoring sites in the western United States going back more than a century. The researchers found that greater than 90 percent of those sites experienced declines in snowpack. Of those, 30 percent were found to be statistically significant. "Declining trends are observed across all months, states, and climates, but are largest in spring, in the Pacifi

c states, and in locations with mild winter climate," Mote and his colleagues write in their paper, published on March 2 in the journal NPJ Climate and Atmospheric Science, a Nature publication.

Current snowpack conditions “It is a bigger decline than we had expected,” Mote says, quoted in a release. The primary cause isn't less snowfall, but warmer temperatures. “In many lower-elevation sites, what used to fall as snow is now rain," Mote notes. The West's snowpack comprises nature's own water storage reservoir — and a gargantuan one at that. "Mountain snowpack stores a significant quantity of water in the western U.S., accumulating during the wet season and melting during the dry summers and supplying much of the water used for irrigated agriculture, and municipal and industrial uses," Mote and his colleagues write in their study.  Warmer temperatures bring spring-like weather earlier than in the past. As this trend continues, increasing spring rain and earlier runoff means declining water supplies running downstream from nature's snowpack reservoir in summer and fall — just when farmers and cities have very significant water needs. 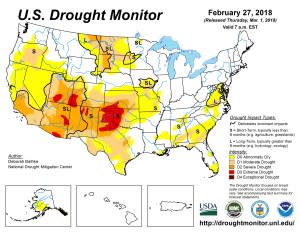 The U.S. Drought Monitor map as of Feb. 27, 2018. Unfortunately, building additional reservoirs to capture more water isn't a viable solution, according to Mote. "New reservoirs could not be built fast enough to offset the loss of snow storage – and we don’t have a lot of capacity left for that kind of storage," he says. "It comes down to managing what we have in the best possible ways.” The challenges posed by declining snowpack are demonstrated by the animation of Landsat images I created for the top of this post. It shows Lake Mead and nearby Las Vegas. Mead ultimately stores water that comes from snowmelt in the mountains of the Colorado River Basin. In the animation, one image shows the reservoir at near full capacity, on May 15, 1984. The other image shows what the lake looked like from space on May 23, 2016, after years of declining inflows. As the animation runs, watch how the lake contracts. Also check out Vegas on the lefthand side of the images. As Lake Mead shrivels, the city expands dramatically. Las Vegas derives 90 percent of its water from the reservoir. So you might be tempted to conclude that the city is sucking it dry. But the truth is more complex. "While overuse has played a part, a significant portion of the reservoir decline is due to an ongoing drought, which started in 2000 and has led to substantial reductions in river flows," write Brad Udall of the Colorado Water Institute, and Jonathan Overpeck of the University of Arizona. In a recent commentary published in The Conversation, they continue:

Most droughts are caused by a lack of precipitation. However, our published research shows that about one-third of the flow decline was likely due to higher temperatures in the Colorado River’s Upper Basin, which result from climate change. This distinction matters because climate change is causing long-term warming that will continue for centuries. As the current “hot drought” shows, climate change-induced warming has the potential to make all droughts more serious, turning what would have been modest droughts into severe ones, and severe ones into unprecedented ones.