Smokey superlatives: widespread wildfire impacts seen from as far away as a million miles from Earth 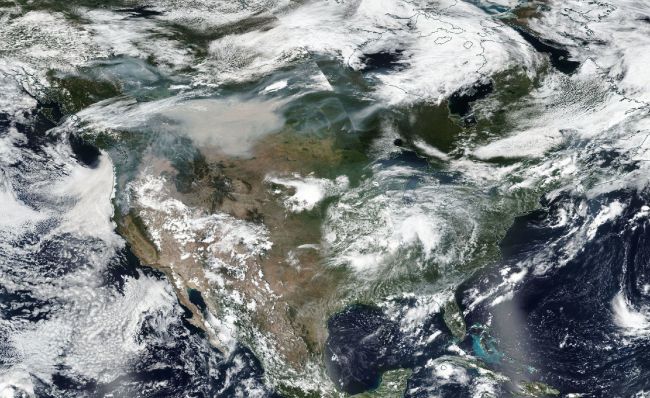 A thick, widespread smokey blanket was seen over northwestern North America by the Suomi-NPP spacecraft on Aug. 15, 2018. (Source: NASA Worldview) I was going to take a break from covering the wildfires blazing across large swaths of western North America — until I checked on remote sensing data this morning and saw the satellite imagery above and lower down in this post. In the the image above, captured by the Suomi-NPP satellite on Aug. 15, check out the thick, sandy-colored smudge of smoke blanketing a huge portion of western North America. At its greatest extents, I measure it at more than 1,000 miles west to east and 500 miles north to south. In British Columbia, 559 fires burning as of Wednesday prompted the Canadian provincial government to declare a province-wide state of emergency for the second year in a row. The smoke from all those fires, and 70 large blazes in the western United States, has raised health risks across large portions of Canada and the United States. On Wednesday, much of northwestern North America experienced unhealthy air quality — for all people, not just those at risk from conditions like asthma and heart disease. https://twitter.com/leahhennelphoto/status/1029764144696709121 In Canada, the Calgary Herald declared a "smoke-pocalypse." As their story noted:

The smoke from the B.C. wildfires continues to blanket the city, with the air quality health index on Thursday morning 10, considered high risk . . . As of 5 a.m. on Thursday, Calgary hit its 212th smoky hour this year, keeping 2018 in third place for its most ever in a single year.

An animation of images captured by the DSCVR spacecraft on Aug. 15, 2018. (Images: NASA. Animation: Tom Yulsman) The smokey blanket was so thick and widespread on Wednesday that it was visible to the DSCVR spacecraft, parked at the L1 point 978,307 miles from Earth. The smoke is clearly visible in the animation of images above, acquired by the EPIC instrument on the spacecraft. Once again, look for the sandy-colored smudge, which is darker than the whitish clouds. Hot and dry weather has been spurring the wildfire activity. Just how hot? 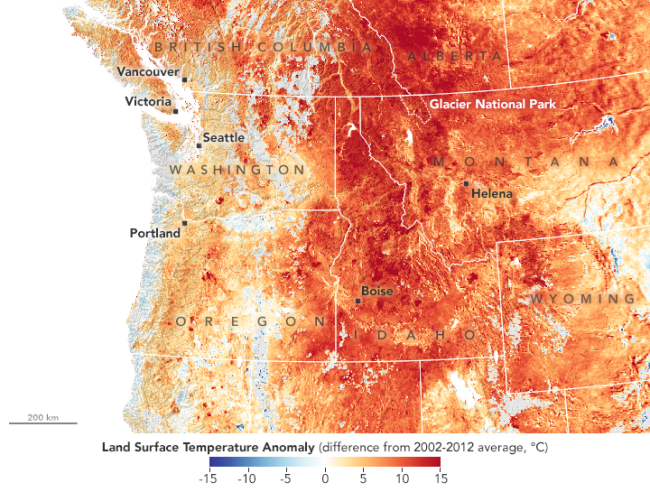 NASA reports that temperature records have fallen across the northwestern United States. "On August 11, West Glacier, Montana, recorded its hottest air temperature on record — 38 degrees Celsius or 100 degrees Fahrenheit—as did Pierce, Idaho (41°C or 105°F)," the agency says. "Seattle and Portland have seen scores of days this summer with temperatures above 90°F." The map above shows just how high above the long term average temperatures were on Aug. 10. The data come from the MODIS instrument aboard NASA's Aqua satellite, and they reveal the temperature anomaly at the surface (not the air right above it). Research has shown that over the past 30 years, human-caused climate change has doubled the area affected by forest fires in the western United States. According to a study published in the journal Proceedings of the National Academy of Sciences, since 1984 rising temperatures and resulting dryness caused fires to spread across an additional 16,000 square miles than they otherwise would have. That's an area larger than the states of Massachusetts and Connecticut combined. "No matter how hard we try, the fires are going to keep getting bigger, and the reason is really clear,” said study coauthor Park Williams, a bioclimatologist at Columbia University’s Lamont-Doherty Earth Observatory. Quoted in a release, he noted that climate "is really running the show in terms of what burns. We should be getting ready for bigger fire years than those familiar to previous generations.”