Smoke from a siege of wildfires spreading across the southeastern U.S. is easily seen from orbit 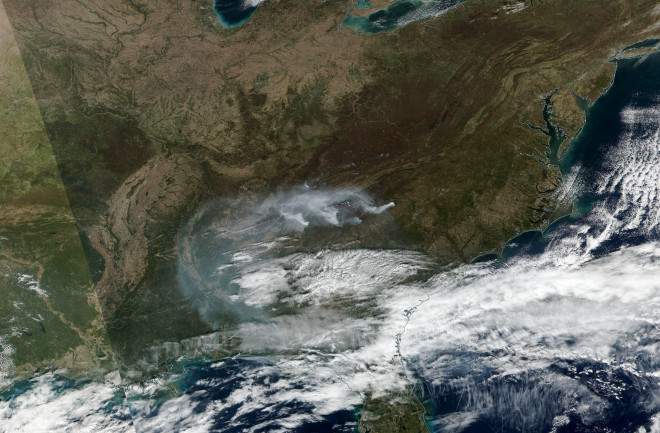 Plumes of smoke from wildfires burning in the southern Appalachians are seen in this broad view of nearly half of the United States acquired by the Suomi NPP satellite on November 12, 2016. The smoke plumes are roughly dead center in the image, almost straight north from Florida. Click on the image and then click again for extreme closeup views. (Source: NASA Worldview) Spurred on by intensifying drought, wildfires continue to spread across portions of the southern United States, sending up palls of smoke that are easily visible from orbit. In the image above, acquired by the Suomi NPP satellite on November 12, the thickest plumes are rising from fires in the southern Appalachians within North Carolina and Georgia. But smoke from fires in Virginia, Kentucky, Tennessee, and South Carolina is also visible.

A zoomed-in view over Great Smoky Mountains National Park and surroundings, acquired by the Suomi NPP satellite on Nov. 12, shows thick smoke rising from multiple wildfires. Labelled in the image is Clingmans Dome, which is located within park. (Source: NASA Worldview) The smoke has prompted authorities to urge residents in some areas to wear masks outdoors. And on Saturday, an estimated 4.5 million residents experienced moderate to heavy smoke in northern Georgia and Alabama.

Aerosols in the atmosphere from wildfire smoke are mapped in this image based on data acquired by the Suomi NPP satellite on Nov. 12, 2016. Reddish tones show areas with the highest aerosol readings and thus the thickest smoke. (Source: SSEC/Google RealEarth) According to an update on the fires from NASA's Earth Observatory:

Wildfires in the southeastern United States are usually small and do not produce much smoke compared to the big blazes in the western United States, Canada, or Russia. But a cluster of fires in Georgia, North Carolina, Tennessee, and Kentucky in November 2016 defied that trend.

The fires are feeding off vegetation that has become increasingly desiccated from brutally dry conditions and unusual warmth. Drought began in the Southeast back in May, and it intensified during the summer and fall.

The evolution of drought conditions in the United States in the six weeks leading up to Nov. 8, 2016. Note the intensifying drought in the southeastern U.S. (Source: U.S. Drought Monitor) By November, exceptional drought — the highest level on the U.S. Drought Monitor's scale — had spread across parts of Mississippi, Alabama, Georgia, Tennessee, and North Carolina. With the exception of coastal areas, all of the Southeast is now in moderate drought or worse. The weather forecast for Great Smoky Mountains National Park and surroundings is for sunny skies until next Saturday, when there is a 40 percent chance of showers. Beyond that, the outlook from the Climate Prediction Center through Wednesday, Nov. 23 shows that below normal precipitation is likely. Looking farther out, the seasonal drought outlook from the center shows drought conditions persisting in the region — through at least January.