Arctic scientists rush to save a rogue piece of equipment and valuable research. 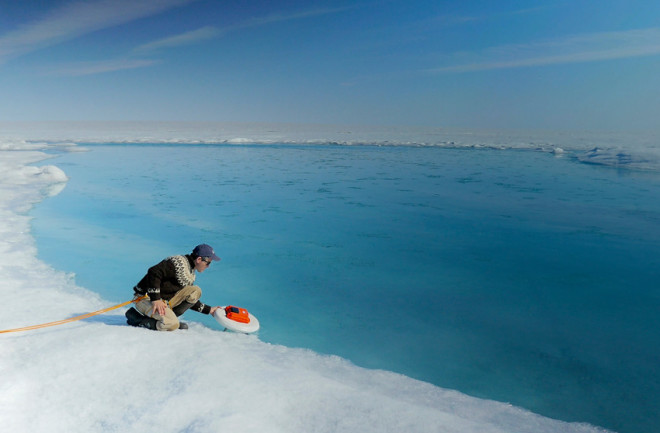 Runoff from Greenland’s melting snow is one of the biggest potential contributors to sea level rise. Scientists usually gauge meltwater runoff by using regional climate models to compare calculations of melting at the surface with estimates of how much water refreezes — whatever water that doesn’t refreeze is considered runoff.

But recent research shows that supraglacial rivers flowing over the ice sheet could swell oceans even more than massive icebergs or the drainage from Greenland’s glacial lakes. To get these findings, a NASA-funded team led by Laurence Smith, chair of the geography department at UCLA, spent six days on the ice during July 2012 — directly after a record-setting ice sheet melt. They braved dangerous, slippery conditions to gather data in some of the planet’s most hostile terrain.

In Smith's own words:

One morning, our helicopter pilot gingerly approached the shore by that day’s destination, Lake Napoli, maneuvering to find a solid spot to land safely. We chose this particular lake because it wasn’t far from one of the supraglacial river sites where we’d been working, and it was so massive — about a mile in diameter. Plus, it was only about 40 to 50 miles from our base camp in Kangerlussuaq, a settlement in the western part of Greenland.

As with every other day of the trip, the weather cooperated and we had blue skies, but we knew the terrain could be treacherous — parking a helicopter on slushy, melting ice is not trivial.

Alberto Behar with the remote-controlled drone boat he helped design. His quick thinking helped his team recover the drone, which held valuable data, when it drifted beyond its remote signal. | Laurence Smith/UCLA

Alberto Behar, of NASA’s Jet Propulsion Lab, who was part of our team and with us on the expedition, designed a remote-controlled drone boat we used to collect data. It maps the depths and reflectivity of meltwater on the ice surface and is a one-of-a-kind piece of equipment built for this very specific application. The parts alone are valued at more than $50,000.

On this particular day, we deployed the drone boat, operating it by joystick from the shore. But the lake was so unexpectedly vast that the boat disappeared over the horizon, and it was not responding to the controls.

I thought it was lost, which would’ve meant that a crucial part of our fieldwork was scuttled — we wouldn’t have been able to do many of the critical measurements that we went there to do. But Alberto ran to the helicopter, we all jumped in and choppered out to the lake. After several nerve-racking minutes, he got back in [the drone’s] radio range. Alberto operated it by joystick from the helicopter and got it back to the shore. That was a very valuable piece of equipment, and he saved it.