Ships Race to Contain the Gulf of Mexico Oil Spill 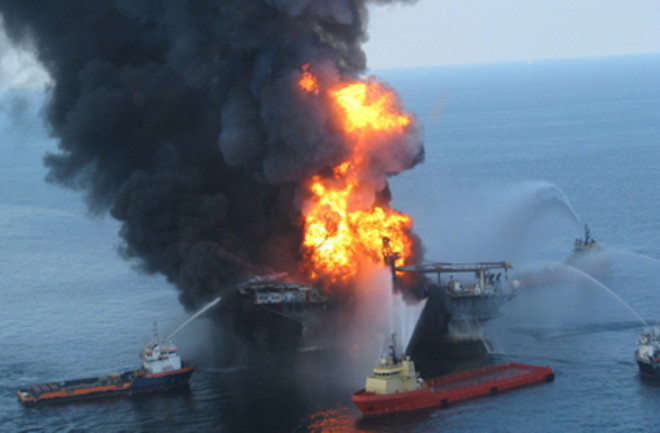 The oil rig fire in the Gulf of Mexico is finally out, as the Deepwater Horizon sank into the sea yesterday and hope for finding 11 missing workers began to fade. The damage assessment for the oil spill, however, has just begun. Oil from an undersea pocket that was ruptured by the rig, which was leased by the energy company BP, has begun to spread outward.

The spill measures 10 miles (16 kilometers) by 10 miles, about four times the area of Manhattan, and is comprised of a “light sheen with a few patches of thicker crude,” U.S. Coast Guard Lieutenant Commander Cheri Ben-Iesau said today [BusinessWeek]

. Whether or not the 700,000 gallons of diesel on board Deepwater Horizon is part of the spill remains unknown. Transocean, the company that owns the rig, admitted that it failed to “to stem the flow of hydrocarbons” before the rig sank. The biggest concern this morning is that the spill could be headed for the coast of Louisiana, less than 50 miles away, which would maximize the environmental damage.

Ed Overton, an LSU environmental sciences professor, said he expects some of the light crude oil to evaporate while much of it turns into a pasty mess called a "chocolate mousse" that ultimately breaks apart into "tar balls," small chunks of oily residue that can wash ashore. "It's going to be a god-awful mess for a while," he said. "I'm not crying doomsday or saying the sky is falling, but that is the potential" [AP]

. Once oil hits land it's far more difficult to clean up; even 21 years after the Exxon Valdez accident, its oil can still be found in Alaska beaches.

Now the task is to stem the tide.

Fearing a potential environmental disaster, BP announced Thursday that it was dispatching a flotilla of more than 30 vessels capable of skimming more than 170,000 barrels of oil a day to protect sea lanes and wildlife in the area of the sunken platform [The New York Times]

. According to the AP, BP had put down 6,000 feet of containment boom by last night, with 500,000 more feet en route. The company is also preparing to dig a secondary well to try to plug the ruptured oil deposit with concrete and mud. The scale of disaster remains to be seen. Energy experts at first estimated a worst-case scenario of more than 300,000 gallons of oil leaking into the sea per day. However, the size of the oil pocket remains unknown. If it's a small one, the containment would be far easier. And in a bit of hopeful news, the Coast Guard said it found no new leakage yesterday.

If you're a fan of DISCOVER, check us out on Facebook.