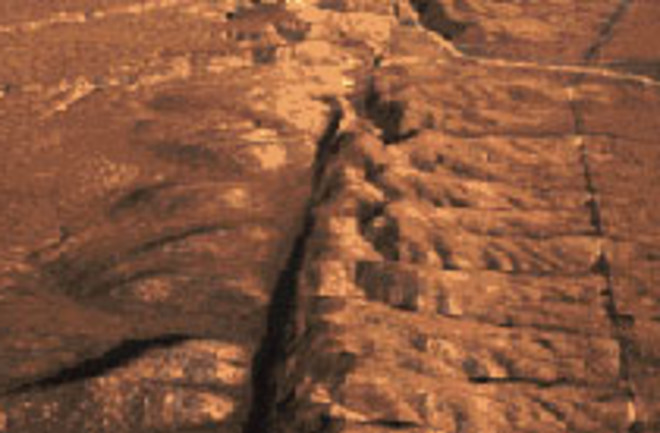 Researchers working at California's San Andreas Fault say they detected subtle geological shifts that occurred hours before two small earthquakes, raising the possibility that scientists could eventually develop an early warning system to get people out of harms way well before the earth started to tremble.

"If you had 10 hours' warning, from a practical point of view, you could evacuate populations, you could certainly get people out of buildings, you could get the fire department ready," said co-author Paul Silver of the Carnegie Institution for Science, Washington. "Hurricane [warnings] give you an idea of what could be done" [BBC News].

In the study, described in the journal Nature [subscription required], researchers drilled two holes in the area around the fault, and measured how long it took to send artificial seismic waves between them. They found

large declines in the speed of seismic waves that began hours before two small earthquakes that shook the region in December 2005 [ScienceNow Daily News]. Researchers say that seismic waves travel slower in less compressed rock, and believe that

the waves were slowed down by tiny fractures forming in the rock ahead of an impending earthquake due to stress in the Earth's crust, according to [Silver]. "It's the opening up of cracks before an earthquake," Silver said [Reuters].

Researchers say that further work will have to be done to determine whether the signals they detected occur at all faults around the world. But if these findings do lead eventually to an early warning system, it would be a vast improvement over the current technology and could save thousands of lives.