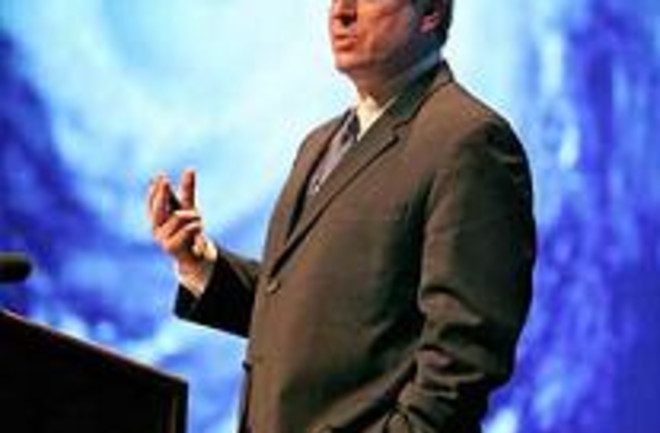 As a marine conservationist, I'm compelled to comment on the Gore/Sea Bass faux pas.. or lack there of. Jennifer and Tim recently posted on the former VP's meal at his daughter's wedding which included (gasp!) Chilean Sea Bass aka Patagonian Toothfish. Our newest Science Blogger, The Angry Toxicologist was quick to weigh in as well, and I already enjoy his company in the blogosphere. Although I'd never order that species myself, it's ridiculous to spend the afternoon lambasting Gore on one meal bearing in mind the event in question. Yes he's an environmental leader, although as far as I know, never claimed sainthood. But rather than wax poetic on something already digested, I see this as a great opportunity to touch on a topic far more significant in marine conservation: Getting the message out that OCEANS ARE IN REAL TROUBLE and impact all of us! I have much to say in this regard, but given the current seafood topic, will begin by reposting my perspective from last April when the Seafood Debate came up at Shifting Baselines on why I continue to eat sustainably harvested fish:

I'm a marine scientist in the conservation policy world. Translation: I go out for dinner and friends order with trepidation.. "Can I get Chilean Sea Bass?" or "Atlantic salmon, is that the good kind?" I smile at the well-intended person across the table realizing he would not stop to consider such a decision in anyone else's company. I could take the staunch environmentalist approach. "No! Don't you know we're fishing down trophic levels?!" Now call me a pragmatist, but that seems a bit ridiculous. Instead, I acknowledge his thoughtful consideration of my profession and say "Order whatever you'd like, we both know that it's already dead on ice in the kitchen."

[I would likely take a moment to explain which species are in trouble, why I personally don't order them, and provide my friend with his very own Seafood Watch wallet card on making sustainable choices.]

You see, while I agree with Jennifer that individual decisions do matter, a great big problem with environmentalists is that we are easily dismissed when mistaken for extremists. Yes, if everyone held hands and declared 'No More Seafood!' it would do something. But externalities like bycatch, run-off, ocean acidification, etc. exacerbate the problem to such extremes that my personal decision to eat fish now and then does not have enough of an impact to rationalize nixing something I enjoy. (Paging Garrett Hardin..) Am I contributing to the Tragedy of the Commons? Perhaps. But then, fish is healthy, tasty, and simple to cook.

When all those seafood buffets across the country transition to sustainable choices rather than piles of grouper and cod, I'll likely follow suit

[by considering abstaining from seafood altogether]

but first and foremost, we need to get the message out. I see this as the most significant contribution to the cause I can personally make. As Randy suggests, it's about marketing. My best friend can tell me all the finalists on American Idol, but hasn't a notion that overfishing is a real issue. Mounds of colorful seafood at her local supermarket suggest otherwise. And more importantly, why should she care? Unless we do our part to make it personally relevant, she's justified feeling there are more important immediate things to worry about as she balances family and a budget.

I digress. We live in a world where we are faced with so many complex decisions. Until we wake everyone up to the fact that the oceans are in REAL BIG TROUBLE and WILL impact all of us, I'm not giving up Mccormick and Schmick's.