She's back! As a giant blob of cold water arises from the depths, La Niña takes over the equatorial Pacific

Will La Niña help bring a warmer or colder winter to your neck of the woods? And will it be wetter or drier? Read on. 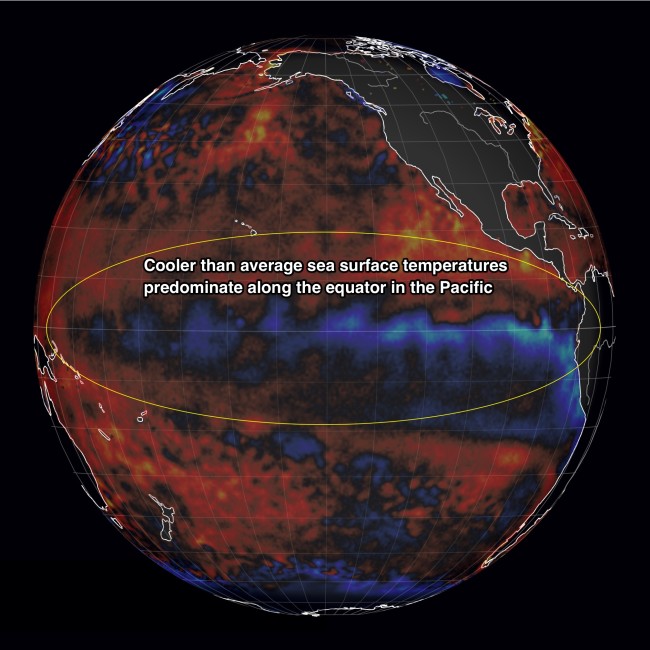 Cool sea surface temperatures in the equatorial Pacific are part of La Niña's fingerprint. According to the latest advisory from NOAA's Climate Prediction Center, La Niña conditions are now in place and stand a 65 percent to 75 percent chance of persisting into April. (Image: earth.nullschool.net)

Before I delve into the substance of this post, I should mention this: As regular readers may have noticed, I've been gone for awhile. That's because my day job is directing the University of Colorado's Center for Environmental Journalism, not ImaGeo — and sometimes there are just not enough hours in the day to keep up with everything. But now I'm very glad to be back. And so is...

La Niña! Okay, I don't know that she's glad. But after arriving and departing quickly last winter, La Niña came back in October – albeit weakly. And it looks like she may hang around for awhile. According to an advisory issued yesterday by NOAA's Climate Prediction Center, she stands a very good chance of continuing through the Northern Hemisphere winter and into the spring. Several conditions have to be met for the CPC to declare a La Niña. Among them: cooler than average temperatures in a part of the Pacific along the equator known as the Niño3.4 region. The graphic up top shows a large spear of cool surface water currently stretched across most of the equatorial Pacific, including Niño3.4. Researchers also must feel confident that those cool conditions will persist for several seasons. The following animation suggests they will:

Temperature anomalies at depth along the equator. (Source: NOAA Climate Prediction Center) The animation shows a cross section of the Pacific Ocean along the equator. The colors chart how temperatures beneath the surface varied from average during each week starting on Sept. 5 and ending on Nov. 4. The vertical axis shows depth beneath the surface, and the horizontal axis shows longitude. South America is toward the right; Indonesia to the left. See that all that blue? That's a gargantuan blob of cold water beneath the surface. It has expanded since, and more of the chilly water has surfaced. This substantial cold blob should help keep the surface waters in the Niño3.4 region cool for the next few months, according Emily Becker, writing in NOAA's ENSO blog. Lastly, the atmosphere above the Pacific Ocean has responded in ways that are characteristic of La Niña. So yes, she's definitely back. And while the scientific details of that return are fascinating (at least to me!), La Niña isn't just a climatic curiosity. 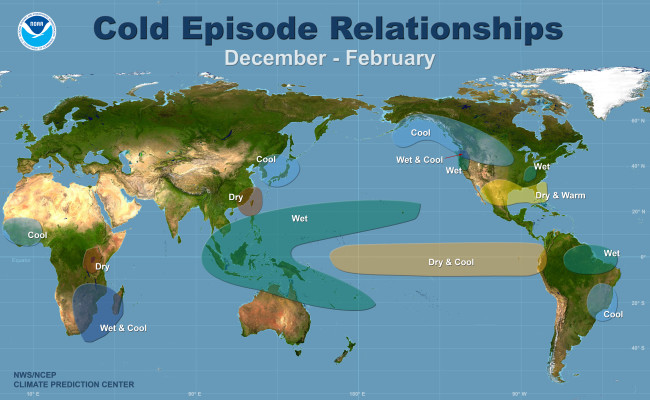 Typical La Niña impacts December through February. (Source: NWS/NCEP/CPC) La Niña is, in fact, the cool phase of what scientists call ENSO – the El Niño-Southern Oscillation. And as such, this cool phase can strongly influence weather patterns around the world, including in North America, as the graphic above illustrates. What about here in the United States? Here's how Mike Halpert, Deputy Director of NOAA's Climate Prediction Center, describes what we might expect by way of precipitation, thanks in no small measure to La Niña:

In the image [at right], the winter precipitation outlook favors below-normal precipitation across the entire southern U. S., with probabilities greatest (exceeding 50%) along the eastern Gulf Coast to the coasts of northern Florida, Georgia, and southern South Carolina. In contrast, above-average precipitation is more likely across much of the northern parts of the country, in the northern Rockies, around the Great Lakes, in Hawaii, and western Alaska.

Which areas of the country are likely to be nudged toward warmer than normal conditions, and which ones cooler? Again, from NOAA's Mike Halpert: 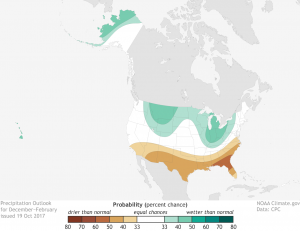 At the Weather Underground's Category 6 blog, meteorologist Bob Henson notes that in North America, La-Niña-induced changes to the jet stream typically lead to "periods of roller-coaster weather, with frequent ups and downs in temperature." Also keep in mind that La Niña isn't the only climatic factor that will be influencing the weather. Another is a phenomenon known as the North Atlantic Oscillation. Fold that in to the mix, and a somewhat different picture emerges for the Northeast than the one currently predicted by NOAA. Again, from Bob Henson: 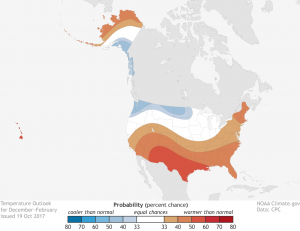 Based on these and other signals, The Weather Company has been leaning a bit more than NOAA toward a chance of early-winter Arctic outbreaks causing colder-than-average conditions over the U.S. Midwest and Northeast.

Looking further ahead, long-range models are suggesting a more prolonged push of cold, stormy weather may unfold in the 7- to 14-day period across much of the Northeast. This is in conjunction with a jet-stream-blocking pattern predicted to unfold as the NAO turns strongly negative.

It bears mentioning that long-range predictions like this are fraught with uncertainty. More clarity will emerge as we get closer to Thanksgiving.