The Arctic will "go through hell this year," says one prominent scientist 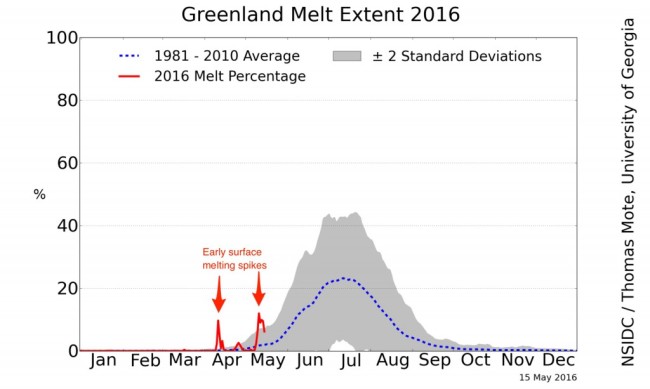 On April 11, a dramatic early spike in melting of snow and ice at the surface of Greenland's ice sheet prompted a Danish climate scientist to say that she and her colleagues were "incredulous." Now, there has been a second bout of unusual melting. You can see both of them in the graph above from the National Snow and Ice Data Center, or NSIDC. It charts the percentage of the Greenland Ice Sheet experiencing surface melting. In both cases, the thaw exceeded 10 percent of the ice sheet's area. When I noticed the second spike, I reached out by email to Ted Scambos, lead scientist for the NSIDC science team, to get his reaction to what has been happening in the Arctic lately. Here was his reply:

The Arctic is going to go through hell this year. Both the sea ice and the Greenland surface melting. Snow cover will also set a record.

Scambos emphasized that he wasn't basing his prediction on a rigorous analysis of data. Instead:

The quacking so far this year has been rather loud all around the the high north, with unusual and persistent warmth, large-scale fracturing of Arctic sea ice, plunging sea ice extent (more about that in a minute), and the two spikes in Greenland surface melting. The April spike was particularly unusual because of its size, and the fact that it occurred so early in the spring. The second spike peaked on May 12 and appears to be subsiding now. It prompted scientists with the Danish Meteorological Institute, or DMI, to announce that the Greenland melt season had begun in earnest — and that this tied with 1999 as the fifth earliest start on record. The DMI considers the melt season to have begun when there has been at least three consecutive days during which more than 5 percent of the ice sheet has seen some melting. As extreme as the April spike was, that episode was not considered the start to the true melt season because it persisted for just shy of three days. Even so, Ruth Mottram, a DMI climate scientist, did not hold back in her assessment of a melt event involving so much of the ice sheet, so early. "Scientists at DMI were at first incredulous due to the early date," she wrote in a post at the Polar Portal, a site jointly run by Danish research institutions. Then the scientists saw observational data confirming that temperatures in some places on the ice sheet were well above freezing — including as high as 50 degrees C (10 degrees C). After that April spike, frigid temperatures returned, causing meltwater to refreeze. And new snow fell atop it. "Since early April, a large dump of snow over the ice sheet in early May temporarily halted melting, which resumed in earnest last week," Mottram writes in her latest post. "Ice melt this week has been driven by warm air moving over the ice sheet, as in April." In fact, one weather station at 6,037 feet (1,840 meters) above sea level on the ice sheet "has again been measuring temperatures above freezing." Above freezing temperatures at such high elevations in Greenland are unusual for May.

True- and false-color satellite views of a portion of Greenland's west coast show darkening suggestive of surface melting. Also visible are tiny melt ponds. (Source: NASA Worldview) The animation above shows what's happening on the ice sheet now. It consists of true- and false-color images acquired by NASA's Aqua satellite over Greenland's western coast on May 15. This is after the the second melting spike on May 12. (I chose these images because cloudiness obscured the ice sheet on May 12.) The first image in the animation shows the edge of the ice sheet in true color. The band of grayish-blue running vertically through the middle is indicative of surface melting. I included the false-color view because the area of melting stands out a bit more clearly, at least to my eye. If you look closely, you can also see little blue dots. These are melt ponds on the surface of the ice. What can we expect moving forward? According to Mottram, an early onset to surface melting on the Greenland Ice Sheet does not necessarily mean that ice loss in summer will be greater than average. "However, it may act to assist in the loss of ice if the right weather conditions coincide," she says. We'll have to see how weather conditions evolve. Meanwhile, all of this is happening in the broader context of extremely unusual and persistent global warmth. And the most unusually warm part of the globe for many months now has been — you guessed it — the Arctic.

That warmth is contributing right now to a shocking drop in Arctic sea ice extent: 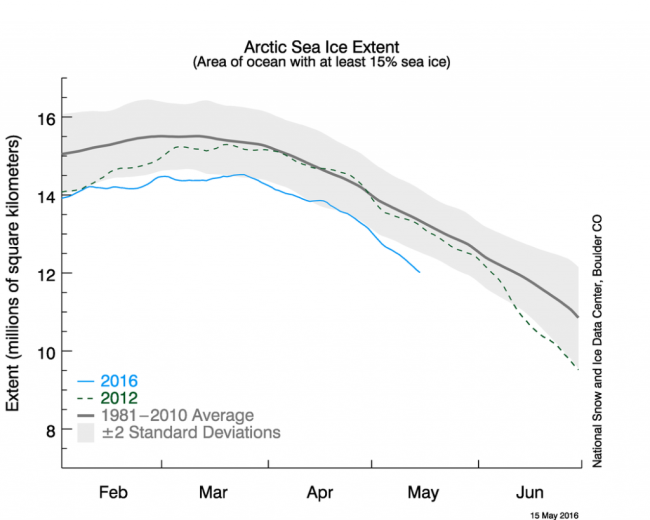 Source: National Snow and Ice Data Center Note that plunging blue line. It shows the trend of Arctic sea ice extent — and it is well below the trend of 2012, which by September had seen a record loss of Arctic sea ice. Will 2016 beat that record? And will the Greenland Ice Sheet experience record surface melting? Stay tuned.