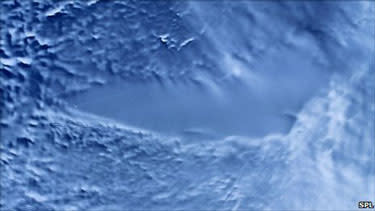 The outline of Lake Vostok beneath the ice, as seen from space.

After two decades of drilling through miles of Antarctic ice, Russian scientists are about to breach an underground lake that has not been exposed to the surface in more than 20 million years. Lake Vostok, as the body of water is called, is part of a chain of more than 200 lakes hidden beneath the ice, some of which were formed when Australia and Antarctica were still connected. Vostok will be the first one of all to be opened when the drill hits water next week. Scientists believe that there may be life in the lake, as ice removed from the Vostok borehole has been found to contain bacteria. And since the subterranean lakes, kept liquid by heat from the Earth's core, are similar to those found on moons Enceladus and Europa, scientists are excited to see what such inhabitants might be like. But the Russian team's somewhat sloppy drilling methods have got a number of people worried about preserving the pristine lake from contamination, as Marc Kaufman reports in a great feature for the Washington Post

. The lake is known to have quite a bit of gas in it, like a carbonated soda, which could lead to a catastrophic geyser shooting up up out of the borehole when the drill finally hits water. If that happened, the lake could lose a quarter of its water and the weather above Antarctica could be altered, due to the sudden influx of water vapor into the air. Yeesh! Fingers crossed all goes well next week...especially given this tantalizing description of the water to be found there:

[Robin] Bell [of Columbia's Lamont-Doherty Earth Observatory], who has studied Vostok using satellite imaging and other above-surface instruments, said the lake is part of a complex system in which ice sheets bring in meltwater at their bottoms and later carry refrozen water elsewhere. She said that although the lake has not “felt the wind” in 20 million to 30 million years, the water in it is not as ancient — in the 100,000s to low millions of years old. The only ancient water present, she said, is probably in the sediment at the bottom.

For more, check out the feature

and Kaufman's stellar earlier coverage of the drilling