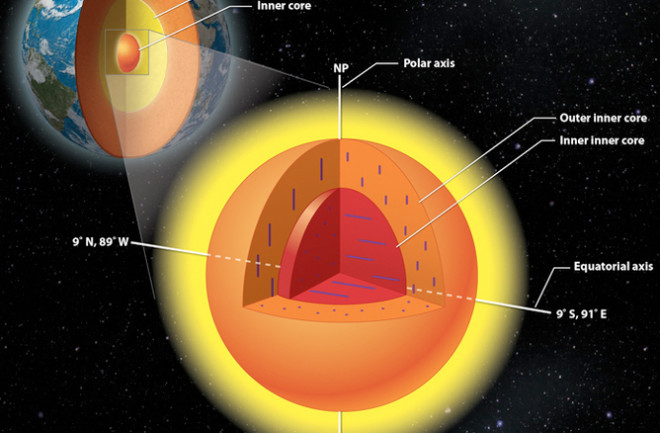 The planet Earth’s inner core is not a single solid mass but comprised of two layers, and new evidence about the core’s composition from a team of U.S. and Chinese geophysicists suggests that the innermost core is rotated on its side compared to its outer layer. The new research, in a paper published in the journal Nature Geoscience, provides new clues about how the inner core formed and began to solidify. Sitting inside a shell of molten iron alloy, the inner core grows at about half a millimeter a year. Probing deeper into the solid inner core is like tracing back through time, to the beginnings of its formation.

The problem is that this part of Earth is farthest away from us, and is difficult to analyze as the seismic waves used to inspect it have to pass through the rest of the planet on their journey to the core and back. Decoding what is going on in the center of the Earth is one of the most challenging problems in geophysics. Despite this, Earth’s magnetic field and the existence of the core may have been essential to the development of life on Earth. The core’s magnetic field acts like a shield to the magnetic storms that the sun continually throws at us.

It isn’t clear when the inner core first started to solidify, but estimates suggest somewhere between half a billion years ago and one and a half billion years ago. This is well into the mature years of the planet, which is more than four and a half billion years old. People have noticed differences in the way seismic waves travel through the outer parts of the inner core and its innermost reaches before, but never before have they suggested that the alignment of the crystalline iron that its composed of is set at a different angle to the outermost parts. If true, this would imply that something very substantial happened to flip the orientation of the core fairly early after it formed, turning the alignment of crystals from the original east-west orientation found in the inner core to the north-south alignment seen today in its outer parts. Interestingly, some researchers who measure the palaeomagnetic field in old rocks from Earth’s surface have previously suggested that the Earth’s magnetic field switched between equatorial axes and polar axes more than half a billion years ago.

It could be that the strange alignment that these researchers see in the innermost core explains the strange palaeomagnetic signatures from ancient rocks that may have been present near the equator half a billion years ago. Some people have correlated this with a sudden increase in the speed of evolution of new life, termed the “Cambrian explosion.” For the moment, however, the model proposed in this paper needs testing against other ways of reading the seismic data from Earth’s innermost core, especially since no other researchers have suggested evidence for the same conclusions in previous studies.