Scenes From the Anthropocene: The Polar Paradox Pt. 1

The photographic image in the animation above is a mosaic of satellite pictures, captured on June 28, 2010, of a mostly cloud-free Arctic. Greenland, with its white ice sheets, is at upper right, and the Arctic Ocean is mostly covered by slightly bluish sea ice. The map shows locations and suspected volumes of undiscovered oil in the Arctic region — a huge potential resource that could become more accessible as the Arctic continues to warm. Please click on the image for a larger version. (Satellite mosaic: NASA Earth Observatory; Map: USGS.) For several decades now, the Arctic has been warming twice as fast as any other region on Earth — one of the clearest symptoms of human-caused global warming. At the same time, the warming of the far north has heralded the opening of what some have called the new Arctic frontier. I recently attended a conference by that very name in the Arctic city of Tromsø, Norway: Arctic Frontiers. Its gestalt can be summed up like this: Global warming is bad for the world. But for nations like Norway, Russia, Canada and the United States, it is also opening the Arctic region to exploitation and transportation of resources — most especially of fossil fuels, which will only make global warming worse. To put a sharper point on it, global warming may well lead to new Dust Bowls, and sea level rise may eventually swamp entire countries. But for some northern nations, the opening of the Arctic frontier means that there’s money to be made. Lots and lots of money. I’ll have more to say in future posts about the geopolitics of this polar paradox, with reporting from my visit to Tromsø — a city that is positioning itself as a major support hub for the new frontier. And since ImaGeo emphasizes the visual, I'll be sure to come up with appropriate images to illustrate the issues. But today, I’ll focus on the warming of the Arctic, and some of the resources Arctic nations are eyeing as the region becomes more accessible. That's the basis for the geopolitics, so it comes first. I created the animation above to illustrate these points visually. The first image is a mosaic of satellite pictures taken on an almost cloud-free day in June, 2010. It shows sea ice covering much of the Arctic Ocean. Although the geographic extent of the ice may seem impressive, it was actually much lower than the long-term average for the month. By September 19, melting sea ice had bottomed out at an extent that was the third lowest in the satellite record, which dates back to 1979. And since 2010, sea ice minimums have declined even more, with 2012 setting the record for the all-time low. The second image in the animation is a map prepared by the U.S. Geological Survey portraying the agency’s best estimate for how much oil and natural gas remain to be discovered in the Arctic region. The areas in green show where reserves are suspected to exist. The USGS estimates that the area north of the Arctic Circle has 90 billion barrels of undiscovered, technically recoverable oil. Add to that tally 1,669 trillion cubic feet of natural gas, and 44 billion barrels of natural gas liquids. (This paper in Science has additional details.) The area north of the Arctic Circle comprises just 6 percent of Earth’s surface. Yet the oil and gas believed to be hidden there “account for about 22 percent of the undiscovered, technically recoverable resources in the world,” according to the USGS. Another key fact to consider: More than 80 percent of all this oil and natural gas, if it does indeed exist, resides offshore, which makes the warming of the Arctic and the resulting shrinkage of sea ice all the more important. 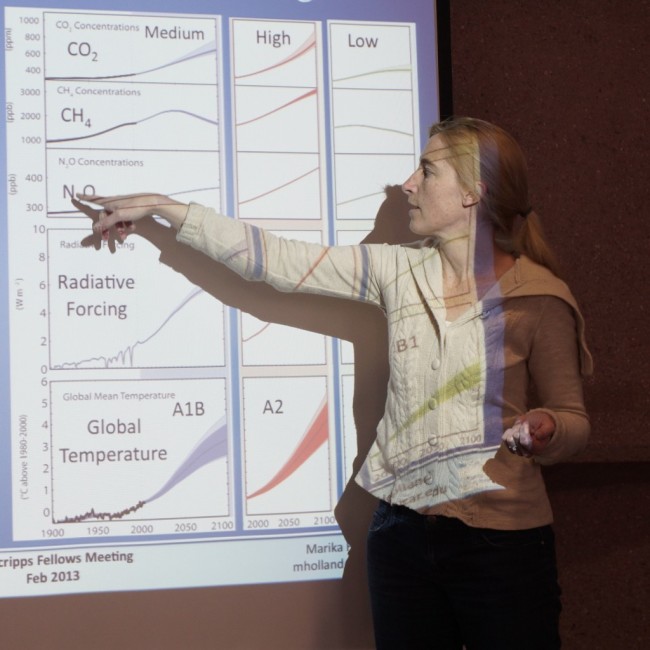 Marika Holland of the National Center for Atmospheric Research. (Photo: copyright Tom Yulsman) According to Marika Holland, a climate modeler and sea ice expert at the National Center for Atmospheric Research, the extent of Arctic sea ice in late summer has already shrunk by an amount equal to the United States east of the Mississippi, plus a few additional states. “We’ve already lost about half of the sea ice cover,” she says. By 2020 or 2030, it could be completely gone. That may sound alarming, but for nations bordering the Arctic Ocean, including Norway, Russia, Canada and the United States, it provides burgeoning opportunities to go after all those undiscovered deposits of oil and gas — not to mention a host of other resources. Norway is already exploring for oil further and further north. The Russians are hot on their heels. In the United States, the Obama Administration announced in late January that it was assessing whether a number of companies “could safely drill for oil and gas in the region at the same time,” according to a dispatch by Margaret Kriz Hobson, a reporter for EnergyWire. And then, of course, there was the case of the grounding of Royal Dutch Shell’s Arctic drilling rig in January. I asked Holland what she made of all of this:

I think it has filtered down to the Arctic sea ice community in that I'm doing a lot more work on short term predictability. This work is partly motivated by a growing interest in knowing what sea ice will look like next year, not in the next hundred years — because people want to get into the Arctic. I'm conflicted. The scientific side of me says this is an incredibly interesting problem to look at — predictability in the short term. This is a very rich problem. But the application side of me? It disturbs me. I think Arctic scientists have been able to stay out of these conversations because it has been such a remote region. We've looked at what might happen to polar bears in 50 years, not when Shell oil can drill."

Now that is all changing, Holland reports. Her work is becoming increasingly relevant to the question of when Shell and other oil companies can drill, and where they can drill. And she definitely sees the paradox in this:

When I attended the Arctic Frontiers conference in January, sea ice extent was well below average, thanks mostly to extensive open water in the Barents Sea and near Svalbard — north of Tromsø. And when I landed in that Arctic city, it was raining.