Say, WHAT? After one of the strongest El Niños on record, another one may be brewing

The equatorial Pacific Ocean is suffering from a split personality disorder: El Niño-ish in the east; La Niña-ish to the west. El Niño is likely to win out. 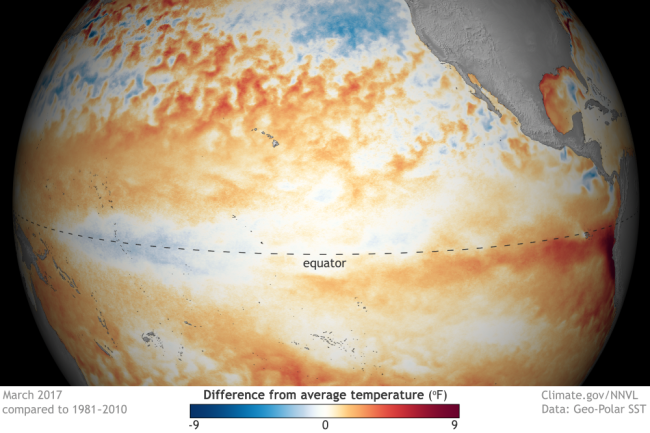 Sea surface temperatures in March 2017 compared to the 1981-2010 average. Cooler-than-average SSTs are present in the west-central equatorial Pacific and El Niño-ish warmer-than-average temperatures prevail to the east, extending out from the South American coast. (Source: NOAA Climate.gov map, based on GEO-Polar data.) Climate forecast models are predicting a full-fledged El Niño by summer or fall. If it should happen, it would bring all manner of disruption to global weather patterns. And it would also be an extraordinary event. If you'll recall, in 2015-16, the planet experienced a monster El Niño event, one of the three strongest on record. It then transitioned into its opposite, La Niña, which has since fizzled into neutral conditions. Now, if El Niño rises from the dead, it would mark just the second time since 1950 that this sequence — El Niño/La Niña/El Niño — will have occurred in three consecutive years. The first time was between 1963 and 1966.

But while the computer forecast models are gung-ho on El Niño roaring back to life by fall (or maybe mewing back to life — it's not clear how strong it could be), human forecasters, observing what the Pacific has looked like in advance of previous El Niño's, are being more cautious. According to a forecast issued last week by the National Oceanic and Atmospheric Administration, there is a 50 percent chance of El Niño developing by September. This is slightly more probable than the current neutral conditions continuing. Forecasters peg those odds at 40 percent. (And La Niña? Forget about it. Just a 10 percent chance.) The trouble is that the tropical Pacific, where El Niño and La Niña brew up, is looking like it's suffering from dissociative identity disorder, known colloquially as a split personality. On the eastern side of the Pacific, a spear of very El Niño-looking warm surface water is jutting out from the coast of South America along the equator. It has been called a "coastal El Niño," and that's where the split personality comes in. It's a coastal El Niño because the warming is fairly intense along the Peruvian coast, but it doesn't extend far across the Pacific along the equator as occurs in a normal El Niño. In fact, have a look at the map of sea surface temperatures above and you'll see that cooler than average water is present in the central and west-central Pacific. That's actually rather La Niña-ish! The surface wind patterns in the west-central Pacific also look more like La Niña. And there's more: a blob of cooler than average water has developed beneath the surface. You can see that blob developing in this animation depicting a cross section of the Pacific along the equator:

This animation depicts a cross section of the Pacific Ocean along the equator. The colors show how water temperatures at depth have varied from average starting in early March and continuing into mid-April. (Source: NOAA Climate Prediction Center) If an El Niño were brewing, you'd expect to see the opposite. Which 'personality' is finally going to win? If you've read that there is a "strong chance" for El Niño developing (as this story claimed), don't believe it. A 50 percent chance is anything but "strong." On the other hand, the El Niño personality is more likely to emerge than any other. Once we get into summer, forecasters will be able to get a somewhat more reliable fix on what could be coming. So stay tuned. Lastly, if you are interested in the nitty gritty details of ENSO — the umbrella term for the El Niño/La Niña phenomena — I highly recommend the ENSO blog over at Climate.gov. It's informative and written in a very engaging style.

Can Your Community Handle a Natural Disaster and Coronavirus at the Same Time?