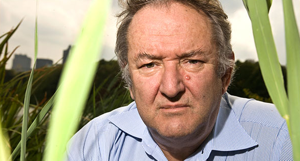 The week, the NYTimes interviewed conservation biologist Stuart Pimm--or 'Indy Pimm' as I like to call him--who works to save endangered species and places around the world from tracking elephants in South Africa to restoring Florida's Everglades. He holds the Doris Duke professorship of Conservation Ecology at Duke University and won the Heineken Prize for Environmental Sciences in 2006 aka 'the Nobel of the ecology world'. But what's most extraordinary about Stuart is that he's doing real conservation that matters. Beyond studying population structure and movement, Pimm's planetary family works in some of the last great wild places with indigenous tribes and across levels of government. (

And yes folks, they have a blog

). Stuart is part of the Union of Concerned Scientists, regularly meeting with members of Congress to communicate why protecting biodiversity is vitally important in a clear and very effective way. He also founded savingspecies.org which restores forests, thus soaking up CO2 from the atmosphere in the most threatened parts of the world called hotspots. In short, 'Indy Pimm' epitomizes the type of third culture science ambassador that Chris and I celebrate and our planet so desperately needs. Here's an excerpt from his interview with Claudia Dreifus:

I realized that extinction was something that as a scientist, I could study. I could ask, "Why do species go extinct?" and "How fast does it happen?" Once armed with that information, one might do something about it. I now spend a fair amount of time in Washington, working for laws to protect species. I train young people to do the same. I often tell my students that if they want to become environmental biologists, they have to be prepared to go out into the field at dawn to collect their data and then dress up in a suit in the afternoon to meet the visiting politician.

Exactly. Read their full conversation here and make sure to listen to the audio discussions on five species at risk.