An animation of before-and-after satellite images shows the area around Fort McMurray in Alberta, Canada. The first was acquired on May 1, just hours before the wildfire erupted. The second shows the same scene on Friday, May 6, after the fire had scorched more than 300 square miles. (Images: NASA Worldview. Animation: Tom Yulsman) Fueled by dry conditions and temperatures in the 80s, the rampaging Canadian wildfire nicknamed "the beast" is expected to grow to more than 700 square miles today — an area equivalent in size to New York City. The blaze has forced the evacuation of Fort McMurray, Alberta's oil boom-town city of more than 80,000 people located 400 miles north of Calgary. An estimated 1,600 homes and other buildings have burned so far. Luckily, winds today are blowing the flames to the northeast, away from the city. Previous days brought no such luck, as the before-and-after animation above shows. It consists of false-color images acquired by NASA's Terra satellite. The before image shows the scene on May 1, just prior to the fire's ignition. The after image shows the identical scene on May 6. The false color scheme renders developed areas, as well as the huge oil sands mining zone north of Fort McMurray, in tan colors. Lakes and rivers, such as the Athabasca River that runs through the city, are dark blue. Areas scorched by fire are shown in reddish tones. And as the animation shows, some areas in the region had burned prior to this. The red dots on the May 6th image, reveal pixels where a sensor on the Terra satellite detected active burning. Here's here's the identical scene, this time viewed in natural color:

Before and after satellite views of the Fort McMurray wildfire, in natural color. Acquired by NASA's Terra satellite on May 1 and May 6, 2016. (Images: NASA Worldview. Animation: Tom Yulsman) In this version of the animation, the gigantic smoke plumes are more clearly evident. Embedded within those plumes you can make out towering fire clouds, known scientifically as pyrocumulus clouds. Their brighter, whiter tops emerge above the more grayish smoke in the plumes.

Here's a higher-resolution satellite view of the fire, acquired by Landsat-7 on May 4th: 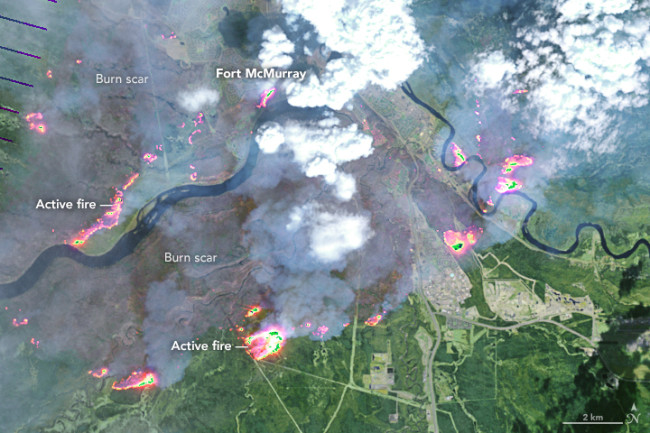 This image of Fort McMurray on May 4, 2016, was acquired by the Enhanced Thematic Mapper Plus (ETM+) on the Landsat 7 satellite. The false-color image combines shortwave infrared, near infrared, and green light. Near- and short-wave infrared help penetrate clouds and smoke to reveal hot spots associated with active fires, which appear red. Smoke appears white and burned areas appear brown. (Source: NASA Earth Observatory) Zooming back out again, here's what the region looked like on May 6th to Aqua, the Terra satellite's twin (make sure to click on it to enlarge it): 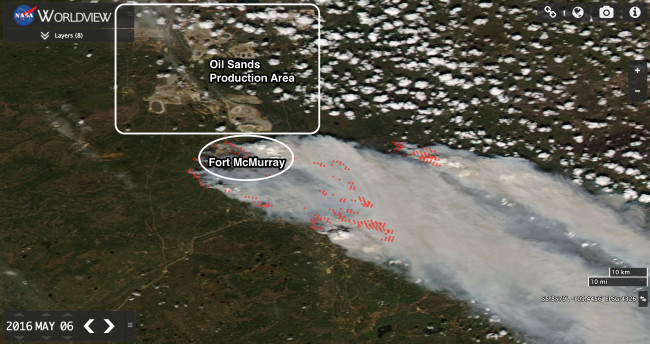 A view of the Fort McMurray wildfire captured by NASA's Aqua Satellite on Friday, May 6, 2016. (Source: NASA Worldview) Unlike the images from Terra, I haven't done any processing to correct exposure and toning issues. I've also annotated it to help you orient yourself geographically. And I've left in the scale at lower right so you can get a sense of just how big this blaze is. Once again, red dots show areas of active burning. The city of Fort McMurray largely exists as a result of the oil sands boom that began in the 1970s. The Florida-sized deposits of these difficult-to-produce fossil fuels in Alberta comprise the third largest oil reserves in the world, after of Venezuela and Saudi Arabia. Exactly what ignited the flames that caused Fort McMurray to go "from boom town to doom town," as one author has bluntly put it, is not yet known. But there is no question that a warm and dry winter had primed the region for a disaster like this. As Bob Henson and Jeff Masters explain at Weather Underground:

. . . snowfall was light this winter across the region, and it disappeared quickly during record warmth in April. From December through April, Fort McMurray recorded only 1.69” of precipitation, compared to the 1981-2010 average for that period of 3.22”.

Then, even more intense warmth descended upon the region — and stayed there for an unusually long period. This occurred in part due to a weather pattern known as an omega block, which kept a dome of high pressure parked over the area for an extended period. 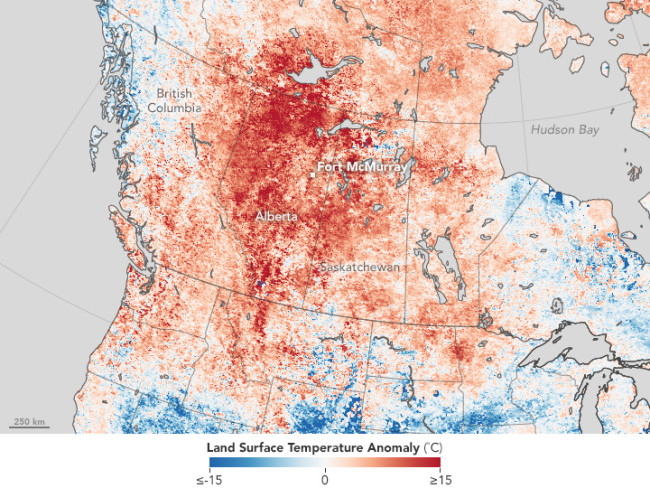 Land surface temperature from April 26 to May 3, 2016, compared to the 2000–2010 average for the same one-week period. Red areas were hotter than the long-term average; blue were below average. White pixels had normal temperatures, and gray pixels did not have enough data, most likely due to cloud cover. (Source: NASA Earth Observatory) On Tuesday, after the fire had begun, Fort McMurray experienced a record high of 91°F, and then another record high of 89°F on Wednesday. The warmth was not an isolated phenomenon. During April, snowpack in the Western United States dropped at record speed, thanks to higher than average temperatures, according to the U.S. Natural Resources Conservation Service. The warm and dry conditions in this part of the world rode in on a record-setting El Niño. And it certainly wasn't the first time that this had happened. The Virginia Hills fire of May,1998 blazed across central Alberta during the tail end of a similarly strong El Niño phase. "That fire occurred under comparable fire danger conditions, part of which you can trace to El Niño,” says Robert Field, a Columbia University scientist based at NASA’s Goddard Institute for Space Studies, quoted in a NASA Earth Observatory post. But El Niño is not the sole culprit. It has occurred on top of the long-term trend of human-caused climate change. Along with the Arctic, Earth's boreal forests (where Fort McMurray is located) are warming twice as fast as other parts of the world — just as computer modeling of Earth's climate predicted would happen as a consequence of rising levels of greenhouse gases in the atmosphere. And as the Weather Underground's Bob Henson and Jeff Masters point out, "in springtime, the snowpack is vanishing far more quickly than it did in decades past, another outcome well predicted by global climate models." Combine natural variation with human-caused climate change, and this is a pretty good picture of what emerges: 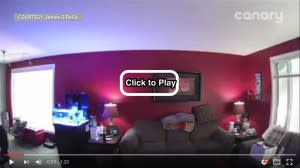