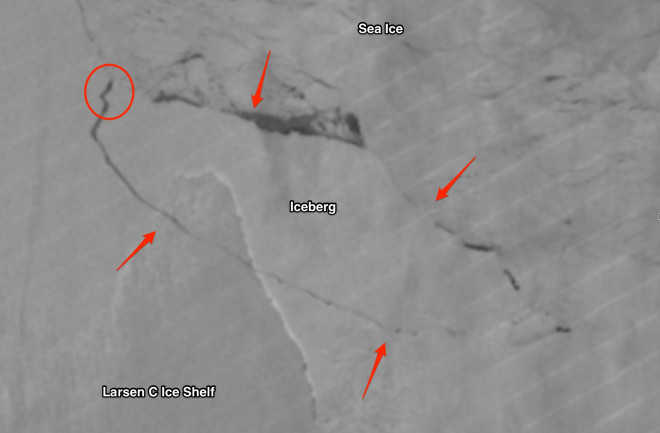 An image acquired by the Suomi-NPP satellite on July 12, 2017 reveals a gargantuan iceberg calving from the Larsen C Ice Shelf in Antarctica. (Image source: NASA Worldview) It has been predicted for a long time, and now it has finally happened: One of the largest icebergs ever recorded has broken free of the Larsen C Ice Shelf on the Antarctic Peninsula. Scientists monitoring a growing rift in the ice shelf confirmed today in a blog post that the trillion-ton iceberg had calved. It occurred at some point between Monday, July 10th and Wednesday, July 12th. The scientists, part of a research project called Project Midas, say the berg is about 2,230 square miles in size — roughly the size of Delaware — and that its volume is twice that of Lake Erie. Here's another comparison: The gargantuan chunk of ice (which is likely to be given the nondescript designation of "A68") is a million times more voluminous than the Empire State Building. Martin O’Leary, a Swansea University glaciologist and member of the MIDAS project team, had this to say about the calving:

Although this is a natural event, and we’re not aware of any link to human-induced climate change, this puts the ice shelf in a very vulnerable position. This is the furthest back that the ice front has been in recorded history. We’re going to be watching very carefully for signs that the rest of the shelf is becoming unstable

The MIDAS team downplays the possible role of climate change in this particular calving event because the rift that finally set the iceberg free appears to have been developing for many decades. But as NASA Antarctic researcher Eric Rignot notes, the climate of the Antarctic Peninsula has has been warming for decades as well. And this has been linked to an overall decay of ice shelves on the Peninsula that has progressed from north to south. "The demise of ice shelves in the Peninsula is well-documented and related to climate warming," Rignot says, quoted in a story by Andrew Freedman of Mashable. The giant calving event was detected by satellites. But it is winter now in Antarctica, so the polar continent is shrouded in 24 hours of darkness. And that means something other than true-color satellite imaging is needed to discern what's happening at the surface. The image at the top of this story was acquired by the nighttime sensor of the Visible Infrared Imaging Radiometer Suite (VIIRS) aboard the Suomi-NPP satellite. This sensor is capable of capturing very low-light emissions from the surface. I've labeled the image to make it easier to see the iceberg, as well as to judge its size. Note the scale at lower right. Also, each of the red arrows is about 10 miles across. And the red circle indicates where the final rifting took place to set the iceberg free. https://twitter.com/StefLhermitte/status/885101491480129536 The animation above was created using data from the European Space Agency's Sentinel-1. The satellite carries an advanced radar instrument to provide an all-weather, day-and-night supply of imagery of Earth’s surface. And here's yet another view:

Source: ESA This image, which provides broader geographic context, also is based on Sentinel-1 radar data. Mountains of the Antarctic Peninsula are clearly visible on the lefthand side of the image. Look closely at those mountains and you can see grayish glaciers flowing out into the broad expanse of white that is the Larsen C Ice Shelf. At the point where those grounded glaciers make the transition from land to water, that's where the floating ice shelf begins. Here's what that looks like in cross section:

A schematic diagram showing a glacier flowing into an ice shelf; the grounding line marking the transition from grounded to floating ice; and icebergs calving at the edge of the ice shelf. (Source: AntarcticGlaciers.org by Bethan Davies) Because ice shelves float on water, icebergs that break free and then eventually melt have no impact themselves on sea level, for the same reason that an ice cube floating in a glass of water does not cause the glass to overflow when it melts. But Larsen C, as with all ice shelves, retards the flow of the grounded ice streams and glaciers behind it. So if this calving event signals the start of the complete collapse of the ice shelf, then the ice streams and glaciers will accelerate toward the ocean. And that willhelp to raise sea level — albeit it at a very modest rate, according to Project Midas researchers. As the Project Midas blog post today put it:

The calving of this iceberg leaves the Larsen C Ice Shelf reduced in area by more than 12%, and the landscape of the Antarctic Peninsula changed forever. Although the remaining ice shelf will continue naturally to regrow, Swansea researchers have previously shown that the new configuration is potentially less stable than it was prior to the rift. There is a risk that Larsen C may eventually follow the example of its neighbour, Larsen B, which disintegrated in 2002 following a similar rift-induced calving event in 1995.

https://youtu.be/H2a3Oemo1e4 Where might the new iceberg go? According to Project Midas:

Source: Project Midas Icebergs are freely floating, so they tend to move with the ocean currents. In this part of Antarctica, that usually means that they drift north along the coast, and then north-east, out into the South Atlantic. We believe that the iceberg will take a track similar to the icebergs produced when the neighboring Larsen B ice shelf collapsed in 2002.

Click on the thumbnail above to see a map showing the tracks of icebergs A47 and A48, produced after the Larsen B Ice Shelf collapsed.