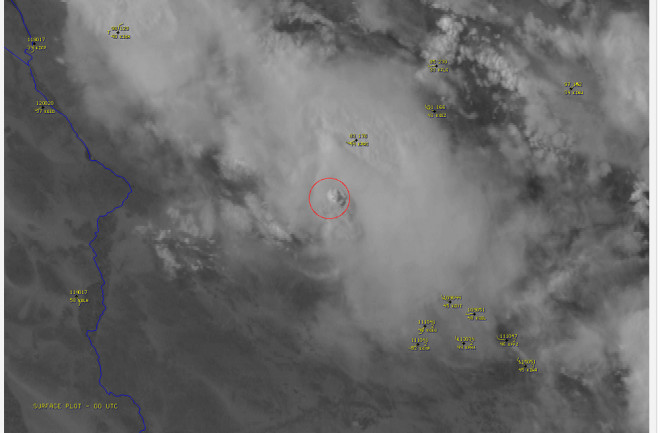 A screenshot from an animation of weather satellite images showing the sudden growth of the Yarnell Hill Fire associated with growth of thunderstorms. The area circled in red is a pyrocumulus or "fire cloud." Click the image for the animation. (Image: CIMSS Satellite Blog.) | See updates below on what weather information the firefighters may have had | In trying to explain why 19 firefighters were killed while trying to protect homes from the rampaging Yarnell Hill Fire in Arizona, Prescott Fire Chief Dan Frajio, quoted in the Wall Street Journal today, said, "only mother nature might be able to explain." But there is a good chance that he's wrong about that. Scientists at the Cooperative Institute for Satellite Meteorological Studies believe that weather satellite imagery and meteorological data probably have provided the answer. Here's the relevant portion from what I think is a critically important post at their Satellite Blog today:

The Yarnell Hill Fire was a relatively small wildfire that was started by lightning from a dry thunderstorm southwest of Prescott, Arizona on 28 June 2013. However, fire conditions became more favorable for growth on 30 June, as surface air temperatures rose above 100 F across the area with low relative humidity values. During the afternoon hours, GOES-15 0.63 µm visible channel images (above; click image to play animation) showed that a line of thunderstorms developed over northwestern Arizona, and moved toward the southwest (the red circle highlights the general area of the Yarnell fire). It is likely that strong surface winds associated with a thunderstorm outflow boundary . . . caused rapid growth and an abrupt change in direction of the fire, which tragically killed 19 firefighters who attempted to shelter in place.

What is a thunderstorm outflow boundary? Here's an explanation from the National Weather Service:

A storm-scale or mesoscale boundary separating thunderstorm-cooled air (outflow) from the surrounding air; similar in effect to a cold front, with passage marked by a wind shift and usually a drop in temperature.

In the screenshot above, look for the small prominence poking out above the cloud deck. It's circled in red. This is the top of a pyrocumulus, or "fire cloud," that has risen above the layer of thunderclouds. Now click on the image to watch how it develops. You'll see the growing thunderstorm clouds and then the sudden appearance of the pyrocumulus cloud. In a thunderstorm, warm, moist air rises rapidly, cooling as it goes, and causing water vapor in the air to condense and form a characteristic cumulonimbus cloud. As water droplets and ice form inside the cloud, they begin to fall and grow. This process leads to downdrafts of cool air that spread out from the base of the thunderstorm. The edge of this cool, outward rushing air is the outflow boundary. The key point is that as the thunderstorms were developing near Yarnell, the firefighters may have been lulled into a false sense of security by the direction of the prevailing winds. But then, with the passage of the outflow boundary, the winds suddenly shifted direction — and this, according to the CIMSS scientists, is the likely proximate cause of the horrible tragedy that ensued. If the scientists are right, it raises some important questions: Are firefighters battling a wildfire connected in real time, or close to it, to weather forecasters who can warn them of developing convection and the threat of a possible wind shift from the passage of an outflow boundary? If not, how can communication between weather forecasters and firefighters be improved? Might it be possible that better communication could prevent future catastrophes? In the coming days, I'll try to track down some answers. Update 2:30 p.m.: I asked the researchers at CIMSS about any additional details they may have, and what kinds of weather information typically is available to firefighters battling a blaze like the Yarnell Hill Fire. Chris Schmidt, a CIMSS researcher, emailed me back to say that the U.S. Forest Service's efforts in helping firefighters with weather data are "rapidly evolving, so it is hard for me to say exactly what this Hotshot crew had on hand or what they saw." He also offered more details about the timing of the wind shift, and the development of the pyrocumulonimbus cloud, or "pyroCB." Some excerpts from his email:

I do know that out in the field access to data is often spotty, so they are likely relying on radio communications with someone who does have a data connection. Also, working out the timing of an outflow boundary can be tricky, and in a situation like this there is topography to deal with that makes intensification sensitive to which direction the wind is changing to. There was the observation from 4 miles south (Stanton) that showed the wind shift and gust up to 43mph. That gives the firefighters about 5 minutes of warning based on a nearby observation. And that assumes that they could get the information immediately after it was measured - for all we know those obs are hourly and the wind could have shifted much earlier. From looking at the satellite imagery, it isn't clear that there is a substantial outflow boundary until after the pyroCb becomes visible. So without knowing exactly what they had available to them, in the absolute best case with the data that we know was available they might have been able to get 5 minutes warning of the wind shift. There may have been other stations providing useful obs as well, but it is an area with sparse population so there may not have been more on the ground observations available. Clearly, reliable data would be of value. Reliable is the key word - it needs to be good, timely information and it needs to be coming in reliably. The latter is an engineering challenge and the former is a challenge for whomever is providing the data and interpretations. In looking at the imagery now and being able to see the pyroCb form, we can say that there was an outflow boundary, but if we knew exactly when they died, I suspect we'd see that the pyroCb came after the fire overran the Hotshot team.

Update 11:30 a.m.: Andrew Freedman has an excellent post up at Climatecentral reporting on the weather information available to firefighters in Yarnell, including whether they had help from specially trained National Weather Service Meteorologists, called IMETs, at the scene. An excerpt from his post:

. . . Firefighters did request a wildfire-specific "spot forecast" from the local National Weather Service forecast office Sunday, which warned of shifting wind conditions associated with afternoon thunderstorms. In a press conference in Maryland on Tuesday, Acting NOAA Administrator Kathryn Sullivan said that in many cases, IMET crews would have worked with hotshot crews such as the one that was overrun, but that no request had been made until after Sunday's tragedy. "Had we have been there maybe we would have had a better outcome," Sullivan said.