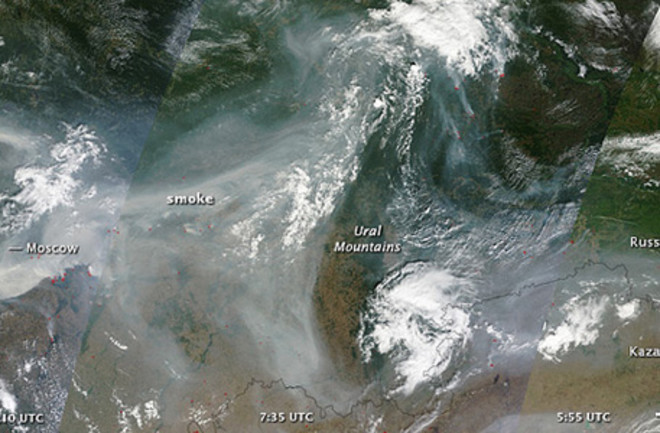 The fires in western Russia continue to burn. Though the overall area now ablaze has shrunk, the number of individual fires has actually risen today. The death rate in Moscow has doubled, and Russia is racing to stop the flames from spreading to areas still affected by radiation from the Chernobyl nuclear disaster a quarter-century ago. While firefighting goes on, attention turns to the "why?" Russia's fire explosion has people wondering if there's a bigger reason behind it. The topic seems particularly urgent because another major natural disaster is happening not so far away: in northern Pakistan, where exceptionally heavy monsoon rains have caused crushing floods. The big question--whether global warming is responsible--is still unanswered, but scientists do agree that a large weather pattern links the events.

According to meteorologists monitoring the atmosphere above the northern hemisphere, unusual holding patterns in the jet stream are to blame. As a result, weather systems sat still. Temperatures rocketed and rainfall reached extremes [New Scientist].

You've probably seen diagrams of the jet stream on weather charts, where a thick band represents its air currents that surge from west to east. However, New Scientist reports

, a "blocking event" caused by west-pushing Rossby waves has slowed the jet stream's flow. This happens from time to time, and it sets the stage for extreme conditions when weather systems hover over the same area. Says Jeff Knight, climate scientist at the U.K. Met Office

"Circulation anomalies tend to create warm and cool anomalies: while it has been very hot in western Russia, it has been cooler than average in adjacent parts of Siberia that lie on the other side of the high pressure system where Arctic air is being drawn southwards" [BBC News].

Pakistan also got stuck with a weather system that plunked down and wouldn't move. The problem there, though, is that it's monsoon season, and the weird circulation worsened that. According to Knight, you'd expect to see more such extremes in a warming Earth. Though you can't point to any one storm, drought, or other event and say "that's because of global warming," Russian President Dmitry Medvedev may have been moved by seeing his country on fire. He reportedly linked Russia's current calamity to climate change

in his public comments. According to the World Wildlife Fund's Alexey Kokorin, that's quite a step for the nation—though it's one that's measured in words.

"These are not brave statements for European leaders or Obama, but for a Russian president, it's a new statement," said WWF's Kokorin. Even last year, Medvedev's speeches on climate change were more about helping other continents like Europe and Asia without really focusing on the negative and severe impacts for Russia itself, he said [The New York Times].

, on the science of wildfires 80beats: NOAA's Conclusive Repots: 2000s Were the Hottest Decade on Record

80beats: Globe-Warming Methane Is Gushing from a Russian Ice Shelf