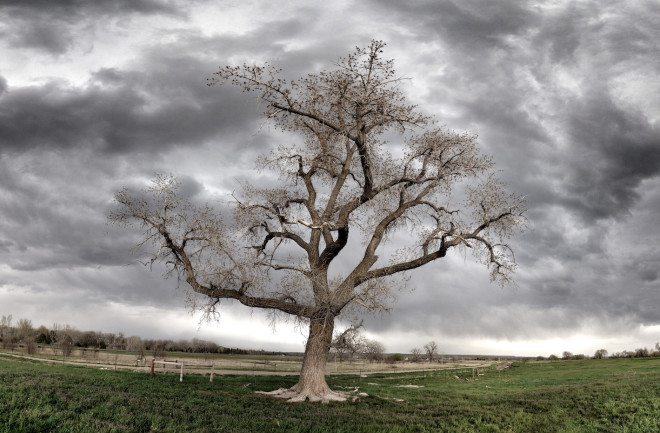 A plains cottonwood stands by itself on the prairie north of Boulder, Colorado on April 23, 2014. The image consists of 14 separate iPhone photographs stitched together into a mosaic. (© Tom Yulsman) From the upper branches of the cottonwood trees overhead — whose shimmering, tremulous leaves are hardly ever quiet, but if the wind stirs at all, rustle and quiver all day long — comes now and then the soft melancholy cooing of the mourning dove, whose voice always seems far away.

Figuring out what to post here at ImaGeo is always one of the highlights of my work life, but I have to admit that sometimes I'm at a loss. That has been the case for the last couple of days, so I decided to sit outside under the massive limbs of a venerable cottonwood tree in my back yard here in Niwot, Colorado, and wait for inspiration. At first, nothing came. So I Googled "plains cottonwood" and came up with a marvelous online guide

to Colorado's native trees, authored by a fellow Coloradan named S.K. Wier. His entry for the cottonwood started with quote above from Teddy Roosevelt. As I began to read it, mourning doves in the branches were cooing. Thus was born my post for today. I have to say that I'm pretty much obsessed with cottonwoods. As a boy growing up in Brooklyn, I played under an almost cathedral-like vault formed by the limbs of sycamore trees that lined our street. So when I moved to this small town at the base of the Rocky Mountains, I felt at first like a stranger in a strange land. The mostly treeless plains sprawled out to the east, seemingly to infinity. Then I discovered the cottonwoods. And they gave me a comforting link to my past, while also beckoning me to explore a brand new kid of environment of awesomely open spaces under skies that seem endlessly dramatic.

The South Platte River on the plains east of Greeley, Colorado, is home to a riparian forest dominated by cottonwood trees. It's visible in this Landsat image as a green strip along the river. Irrigated crop circles also hug the Platte. (Source: USGS) It turns out that the plains of Colorado do have forests — about 250,000 acres worth

along streams and rivers. And they are dominated by the plains cottonwood, Populus deltoides. The trees also stretch along the many irrigation ditches that newly arrived Europeans dug when they figured out that not enough water fell from the sky to sustain crops. The cottonwood in my backyard is one of those, and I reckon that it has been standing here for well over 100 years. She's gnarly but showing no signs of ill health. As I write this, her leaves are starting to pop out, as are the little capsules containing the seeds that in June will be carried by wind-borne cotton. I know that the tree is a "she," by the way, because only females shed this cotton. Lots and lots of cotton — so much so that it makes my backyard look like it has been covered by snow. My cottonwood is one of several around Boulder County that I've come to know well over the years. I visit them on bike rides, during my runs, and on drives home when I decide to take the back roads. (Which is often.) I've featured one of them — a true rugged individualist — in the image at the top of this post. It sits by itself along a ditch north of Boulder. I am endlessly fascinated by its outline against the sky, particularly before it has leafed out. The image itself is a mosaic of 14 iPhone photographs that I shot last week during threatening weather. I used an app called Autostitch to stitch them together. I then processed the mosaic with another app, called Snapseed. I've rendered the clouds with a bit more drama than what was present at the time. But only a bit more.