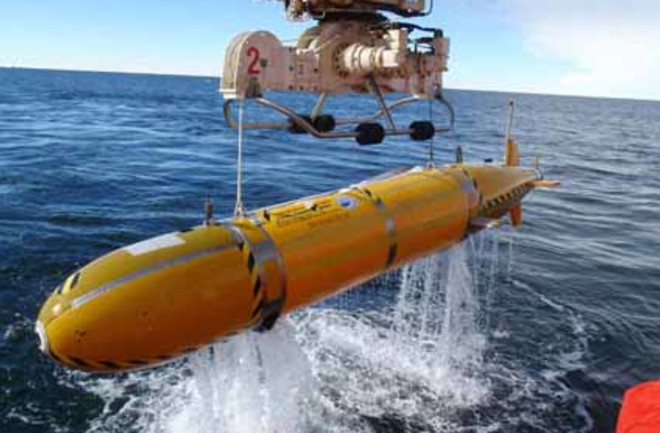 Why is Antarctica's Pine Island Glacier losing so much ice into the sea? Because, researchers say, it has come unstuck at the bottom. The Western Ice Sheet in Antarctica contains "enough water to raise global sea levels by several metres," Christian Schoof writes in an accompanying commentary on the paper in Nature Geoscience, and so the high rate of ice loss in place like Pine Island is a worry. But the force of the atmosphere, even if you accounted for a warming Antarctica, doesn't explain the melting rate. So the British Antarctic Survey team led by Adrian Jenkins ventured a guess that something else was going on under the ice, and sent a robot to investigate. What the autonomous underwater bot found was pretty jarring.

In just a few decades -- since the 1970s -- the relatively warm deep ocean water flowing beneath the cold, buoyant glacier meltwater has encroached inland under the glacier some 30 km, or 18.6 miles, and the pace of the outflow of Pine Island Glacier continues to accelerate [Discovery News].

Underneath the glacier, the explorer's acoustic instruments found a huge ridge that rises about 1,300 feet up from the rest of the seabed upon which the glacier rests. But the relatively warm ocean water has been cutting away the glacier's underside. According to co-author Pierre Dutrieux, that ridge can help explain why ice loss accelerated so recently.

"Some decades ago, the glacier was sitting on this ridge and the friction of the ridge was restraining the flow of the glacier," he explained. "When the glacier became detached from the ridge, the ice flow was able to accelerate significantly" [BBC News].

The team's findings bring up the climate change question, but as with any single event, the dynamics are too complex to say "global warming caused this." Jenkins addresses this problem in his statement

“The discovery of the ridge has raised new questions about whether the current loss of ice from Pine Island Glacier is caused by recent climate change or is a continuation of a longer-term process that began when the glacier disconnected from the ridge. We do not know what kick-started the initial retreat from the ridge, but we do know that it started some time prior to 1970. Since detailed observations of Pine Island Glacier only began in the 1990s, we now need to use other techniques such as ice core analysis and computer modelling to look much further into the glacier’s history in order to understand if what we see now is part of a long term trend of ice sheet contraction."

80beats: An Iceberg the Size of Luxembourg Breaks Free from Antarctica