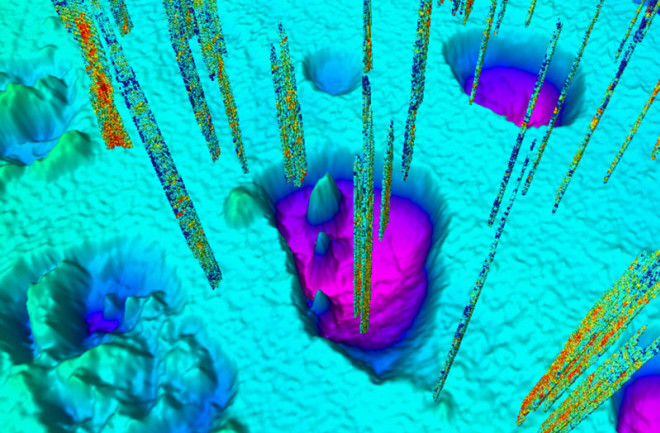 Methane still seeps from these craters on the Barents Sea floor, formed some 12,000 years ago when pent-up methane burst from sediment. (Illustration Credit: Andreia Plaza Faverola/CAGE) A massive reserve of methane — a greenhouse gas more potent than carbon dioxide — is trapped deep within the seafloor. In northern latitudes, thick ice sheets act as a lid sequestering gases at the right temperature and pressure. But when that ice melts, it’s akin to popping a cork on a pressurized bottle of champagne, rapidly releasing large volumes of the pent-up gas. For proof that warmer conditions can spur violent belches, a team of scientists based in Norway looked to the Barents Sea, where high-resolution bathymetry — water depth measurements — revealed a seafloor pockmarked with giant craters, some more than a half-mile wide and nearly 100 feet deep. In a study published this week in Science, the researchers say methane gas blowouts formed these scars some 12,000 years ago after a major glacial retreat in the Arctic. As thawing continues at Earth’s poles, what happened here long ago may be a harbinger of what’s to come.

At the seafloor, methane exists as a hydrate, an icy mixture of gas and water that is stable within a narrow range of pressures and temperatures. Methane hydrates represent a vast store of untapped energy, though they aren’t currently being exploited for production. Roughly 23,000 years ago, glaciers in the Barents Sea sat atop the sedimentary bedrock and provided pressure that kept chunks of methane hydrate at equilibrium.

The swathe of the Barents Sea seafloor researchers studied, roughly 270 square miles, contains 100 sizable craters. (Illustration Credit: K. Andreassen/CAGE) But the ice melted over thousands of years, reducing the glaciers' stabilizing pressure. This caused chunks of methane hydrate to melt and allowed gases from deeper within the bedrock to bubble up, forcing seafloor sediments upward. Eventually, this formed dome-shaped mounds bloated with gases, called pingos. But they wouldn’t last very long. Decomposing methane hydrates and bubbling gases carved channels in the pingos and weakened their structural integrity. Eventually, the pingos collapsed, quickly expelling large volumes of methane and forming the craters that scientists observed in their study. “These mounds were over-pressured for thousands of years, and then the lid came off. They just collapsed releasing methane into the water column" says Karin Andreassen, lead author of the study and professor at the Centre for Arctic Gas Hydrate, Environment and Climate.

Still today, methane steadily seeps from some 600 gas flares scattered around the field of craters researchers studied. Throughout the world’s oceans, much of the gas that seeps from flares never reaches the atmosphere; instead, methane often dissolves in the ocean, or is converted to carbon dioxide by microbes in the sediments or water column. However, Andreassen says levels of gas trickling from these flares doesn’t compare to the massive volume of methane that can burst into the ocean following a major blowout. Still, it’s unclear if such a voluminous release of methane would in any way affect levels of greenhouse gases in the atmosphere. In February, the U.S. Geological Survey and the University of Rochester concluded that the breakdown of gas hydrates on the seafloor is unlikely to lead to a major uptick in levels of methane in the atmosphere.

One of the many mysterious craters in Siberia. (Credit: Yamal Governor's Press Office) Andreassen and colleagues say their work simply provides a conceptual model for a thaw-blowout cycle, and could serve as a framework to forecast what will happen in years to come in another period of glacial retreat. Interestingly, a similar process might be playing out on land in Siberia’s Yamal and Gydan peninsulas. There, scientists say they have discovered thousands of pingos on land swollen with methane gas, according to The Siberian Times. It’s believed that Siberia’s mysterious craters form when these pingos blow. It’s quite clear that Earth belches from time to time, but how these gases ultimately affect the atmosphere, and in turn climate, remains a lingering question.