Reading Climate Change in the Leaves

An ecologist records nature's color signals to understand the feedback between plants and a changing climate. 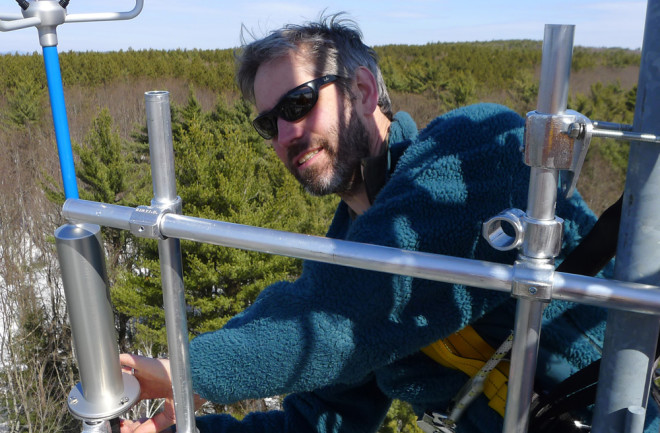 A silver station wagon loaded with climbing gear, computers, electrical wiring and a few scientists from Harvard University stops near a stand of pine and oak trees in the Harvard Forest, about 70 miles west of campus. Physiological ecologist Andrew Richardson, leader of this expedition, slips from the driver’s seat and grabs gear to ascend a metal tower among the trees. Its peak affords Richardson a clear view of his living laboratory: the forest canopy.

Above the treetops, he checks a cluster of instruments that analyze the lush canopy as a collection of numbers: the amount of carbon being inhaled from the atmosphere, the concentration of water vapor in the air and the precise mix of hues the leaves exhibit.

Different pigments serve different functions: Green chlorophyll, which dominates during the growing season, absorbs light energy for photosynthesis, the conversion of carbon and water to sugar. In the shortening days of autumn, red anthocyanins and yellow carotenoids take over to help protect leaves against light damage.

To document this subtle seasonal color change, a webcam atop the tower snaps high-resolution images of the canopy every 30 minutes from dawn to dusk and uploads them to an online database. During the past decade, Richardson has spearheaded an effort to install more than 80 such cameras at sites across North America, from the arctic tundra near northern Alaska’s Toolik Lake to the tropical grasslands surrounding Hawaii’s towering Mauna Kea.

This PhenoCam Network amasses thousands of photos per day. Over time, Richardson hopes the resulting trove of color data will help scientists understand — and better predict — how ecosystems like the Harvard Forest respond to changes in the climate.

Fall colors in the Harvard Forest on any given day (Oct. 9, in this case) vary from year to year, depending on temperature and rainfall. | Courtesy of Andrew Richardson/PhenoCam Network (3)

Over the course of millennia, white snow cover, vibrant autumn foliage and bright bursts of green have punctuated the rhythmic cycles of winter frosts, spring showers and long, warm summer days. Animals have evolved to be in sync with seasonal change: They bring young into the world just as nutritious green sprouts emerge in spring, and molt to blend in with winter whites and summer green-browns. It’s an intricate dance scientists refer to as phenology.

Richardson’s efforts to decipher this color code began in the 1990s, shortly after his return from an eight-month trek in Canada’s Yukon Territory. “It was the vegetation, the transition from forest to tundra and how the colors changed through the seasons that really captivated me,” he recalls. Richardson had recently abandoned pursuit of a Ph.D. in economics at MIT and found himself in awe of nature’s colorful clockwork — so much so that he redirected his studies.

Richardson enrolled in Yale University’s forestry program in 1996 and a few years later threw himself into a project lopping off balsam fir and red spruce branches in the White Mountains. He measured how much light the needles reflected in different wavelengths. This is an indicator of stress and “a very precise way of measuring color,” he explains.

Richardson showed that needles in the harsh, resource-poor high altitudes invested in stress-protection pigments to cope with wind, cold and blazing sun.

“Phenology is really sensitive to weather,” Richardson explains. “If it’s a cold spring, leaves will come out later. If it’s a warm spring, that will happen earlier.”

Forests in the United States absorb and store more than 750 million metric tons of carbon dioxide each year, or more than 10 percent of national carbon emissions. Warmer temperatures triggering earlier green sprouts could produce a longer growing season in some places and more photosynthesis — and thus more carbon uptake. But early growth followed by frost or drought could damage fragile sprouts and reduce the amount of carbon that certain plants are able to absorb. Some species also respond to warming by fast-forwarding through their life cycles, narrowing the window for photosynthesis and carbon uptake.

Nature’s color palette already shows effects of climate change. Along the East Coast, where the “green wave” of spring leaves sprouting from maples, oaks and poplars historically has rolled from Miami to Maine in 75 days, atmospheric scientists with Princeton University predict the wave could take just 59 days by the end of the century. In parts of New England, fall colors arrive a few days later than they did 20 years ago, and the reds are more muted as autumn temperatures in the region warm.

But scientists don’t know what new rhythms will arise across different regions — whether bursts of green will be brighter but shorter-lasting, for example, or more muted but longer-lasting. Nor do they know what such changes mean for the food web; for life-cycle events like migration, breeding and nesting; for the amount of moisture that trees will suck from the soil; or for the amount of carbon dioxide stored by plants.

That’s what Richardson hopes to tease out. “As we build up a big archive — warm years, cold years, wet years and dry years — we can use the data to develop models of how weather and phenology are related,” he says. These models can then be mapped against climate forecasts to predict how phenology could shift in the future, painting a picture of landscapes in a world of warmer temperatures, altered precipitation and humidity, and changes in cloud cover. “We want to use phenology as a biological indicator of the impacts of climate change on ecosystems,” Richardson says.

Webcams offer a cheap way to monitor foliage at a local scale across a broad geographic range. “These pictures give you this permanent record,” Richardson says. “I can see what it was like on any day. I can go back to other years and compare, and tell you how things are different between those two years.”

Scientists have used satellite-mounted sensors to indirectly measure vegetative growth around the globe for decades. But cloud cover and other atmospheric clutter often muddle the data. A study published in Nature in February suggests that previous models based on satellite data have overestimated greenness during dry seasons in the Amazon rainforest. Shadows, which shorten over the course of the tropical dry season, produce an optical illusion: Leaves reflect more light in the infrared spectrum, even as their actual greenness declines.

Researchers need ground-level measurements like those of the PhenoCam Network to validate remotely gathered information and refine the algorithms used to evaluate it. Richardson’s work complements field observations by researchers like Harvard ecologist John O’Keefe, who visited the same trees in the Harvard Forest every few days for more than 20 years, starting in the 1990s, to track the opening of buds in springtime and autumn leaf coloration. Last year Richardson’s team analyzed O’Keefe’s historic data set and found that most local tree species will likely display fall colors for longer durations and at higher intensity in coming years.

A decade and a half after Richardson’s shift to ecology, he has come to see leaf color the way an economist might view a financial statement. “It tells you a lot about the physiology of the leaf,” he says.

Eighty-two feet up the tower, Richardson emerges above the dark understory of the Harvard Forest to feel a flush of sunlight and a flick of breeze on his face. “The views from the top are fantastic,” he says, “and this motivates a lot of what I do.” His methodical quest to decode the phenological rainbow has a way of propelling itself forward. As Aldo Leopold, who doggedly recorded seasonal signposts in Wisconsin in the 1930s and ’40s, once wrote: “Keeping records enhances the pleasure of the search, and the chance of finding order and meaning in these events.”

[This article originally appeared in print as "Cracking the Climate Color Code."]