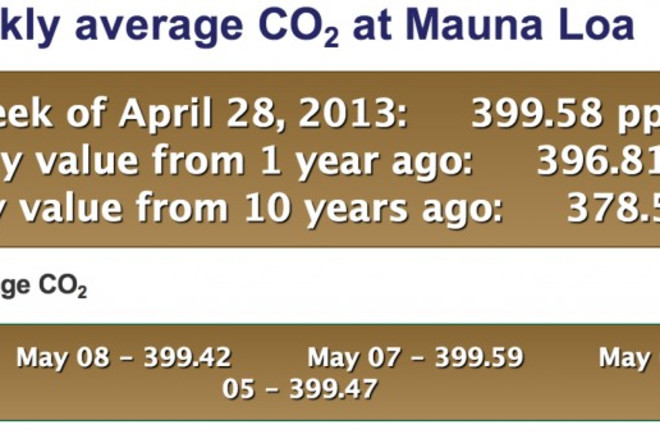 The average concentration of CO2 for May 9 as measured on Hawaii's Mauna Loa exceeded 400 parts per million. (Graphic: NOAA Earth Systems Research Laboratory) It seems that in recent weeks people were waiting with great anticipation for something everyone knew would come some day. And now it has happened: The concentration of carbon dioxide in the atmosphere, as measured from near the summit of Mauna Loa on Hawaii, averaged more than 400 parts per million yesterday. (See here and here.) It is the first time in 55 years of measurement that this has happened. And the Earth probably has not seen CO2 levels this high for millions of years. Robert Kunzig has an excellent story at National Geographic about the science of CO2 monitoring. He also describes what research on ancient climates tells us about the significance of CO2 levels this high. So rather than address those issues, I thought I'd bring up something else: Just what kind of "milestone," as Kunzig called it, is this? What is the significance of surpassing the 400 ppm "threshold"?  Actually, I'm not entirely sure of the nature of that supposed milestone. Yes, for one day carbon dioxide in the Northern Hemisphere during spring surpassed 400 ppm. But will the weekly mean show that high a reading? Maybe. Maybe not. And it is unlikely that May will show an average higher than 400 ppm. Moreover, as plant growth kicks into high gear with warming temperatures, thereby removing CO2 from the atmosphere, the concentration will drop. And unless something remarkable happens, the average for 2013 won't exceed the magic number either. Don't get me wrong. I'm not at all questioning the inexorable rise in CO2, or the impacts it has been having on the globe's average temperature, and climate system. Far from it. But I am asking myself this question: What milestone have we passed? What threshold have we stepped over? A purely symbolic one, for sure. And a rather indistinct one at that. Not until the entire globe averages 400 parts per million for a year will the fuzziness disappear. That will take awhile. And even when it does, except for a number, nothing tangible will have changed — most especially not the endless, seemingly dead-end debate we've been having about climate change. It didn't have to be that way. I wrote my first feature article about climate change in 1984. I recently re-read it, and I was amazed at two things: How much the science of climate change has advanced since then, but also how little the overall parameters of the issue have changed. In the story, I wrote about a report from the National Academy of Sciences, which said that clear signs of the climate change might appear as soon as the 1990s. And I also noted news accounts of the report focusing on the possible dire impacts: "...of cities like Charelston, South Carolina, submerged, of the nation's breadbasket transformed into a desert and of New York City enjoying the same average temperature that Daytona Beach, Florida, does today." I also noted that these were worst-case scenarios that might develop if we failed to take action. But that we had time to begin grappling with the problem:

In short, said the NAS, the greenhouse effect is a reason for 'caution, not panic.' It will unquestionably pose serious, costly dilemmas for society. Building seawalls, altering agricultural techniques, moving farms, making provision for those who lose their livelihood from a change in climate and adapting to extremes of weather are all truly daunting prospects. But the impact won't come all at once. We have the luxury of knowing in a scientific way what may happen 100 years from now — a luxury not available to societies that survived catastrophes more horrifying than global warming. So there is reason to hope that we will not only cool the calamity of greenhouse Earth but also take advantage of whatever benefits it provides us."

Now it's almost three decades later, and yesterday we passed by some sort of fuzzy milestone. Whatever that means, we have a lot less time to grapple with the problem than we did in 1984 — when CO2 as measured on Mauna Loa stood at 340 parts per million.