Rash of Earthquakes---in Maine!---Brought to You by the Last Ice Age 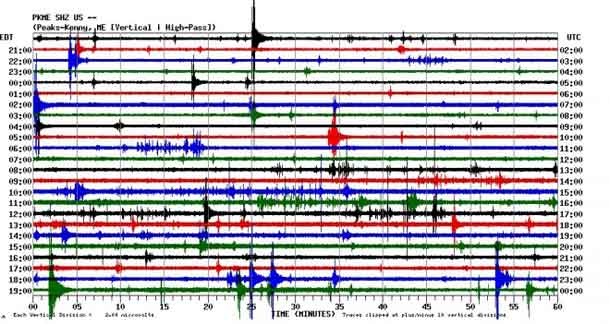 What's the News: When residents living on the central coast of Maine experienced nearly 30 small earthquakes in early May, some phoned their local authorities to report gunshots and unexpected blasting. That's because Maine lies far from any active faults and rarely experiences more than two earthquakes a year. Measuring less than 2 on the Richter scale, these small tremors were actually vestiges of the most recent Ice Age. As mile-high slabs of ice plowed their way across most of North America 25,000 years ago, they compressed Earth's crust hundreds of feet, and ever since the ice melted away around 14,000 years ago, the land beneath our feet has been decompressing, much like a (very slow-moving) bed springs back to an equilibrium position when you get up in the morning. “The crust of the Earth is constantly moving," Maine’s Bureau of Geology director Robert Marvinney told Wired. "We just don’t think about it that way, because it seems stable during our lifetimes."How the Heck:

Put Down the Duct Tape: The recent Maine quakes were all under 5 on the Richter scale, which means that they were well below the threshold at which earthquakes inflict damage to people or buildings. Image: The seismic waves measured between April 29 and May 5 in Maine. Courtesy of Maine Geological Survey.