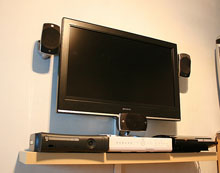 New measurements of a rare but potent greenhouse gas finds levels to be four times higher than previously thought. Nitrogen trifluoride (NF3), used mainly in the manufacture of flatscreen TVs and microcircuits, is 17,000 times more powerful at trapping heat than an equal mass of carbon dioxide. Although NF3 is currently responsible for only 0.15 percent of human-induced global warming, the new analysis indicates that levels of the gas

Scientists at the Scripps Institution of Oceanography in La Jolla, California looked at air samples taken in California and in Australia.

They found that over the past three decades, the atmospheric concentration of the gas has increased more than 20-fold, from 0.02 to 0.454 parts per trillion, with most emissions occurring in the Northern Hemisphere. The overall amount of the gas in the atmosphere, estimated in 2006 at less than 1,200 tonnes, was then actually 4,200 tonnes and has since risen to 5,400 tonnes, they report in

Yet the Kyoto protocol does not set limits on NF3 emissions because it was made in tiny amounts when the protocol was agreed in 1997 [New Scientist].

The gas was introduced in the last decade as a safer alternative to perfluorocarbon gases (PFCs), another potent greenhouse gas that is regulated by the Kyoto protocol. However, the dangers of NF3 emissions were not publicized until earlier this year, and previous techniques could not accurately gauge levels of the gas in the atmosphere. "Now we need to get hard numbers on how much is flowing through the system, from production to disposal,"

Scientists are pushing for tighter regulations of

. Ray Weiss, co-author of the new study, says, "From a climate perspective, there is a need to add nitrogen trifluoride to the suite of greenhouse gases whose production is inventoried and whose emissions are regulated under the Kyoto Protocol, thus providing meaningful incentives for its wise use" [Reuters].