An animation of false-color satellite images of southern Turkey and the island of Cyprus. Snow cover shows up in bright red and orange tones. Clouds show up in white and peach tones. (Images: NASA. Animation: Tom Yulsman) After causing havoc, and bringing misery to hundreds of thousands of Syrian refugees displaced from their homes by civil war, the rare snowstorm that lingered over the Mideast and Turkey began to ease today. Video and photographs showing the impact of the snowstorm have received widespread attention over the past few days. So I thought I would showcase some imagery that you may not have seen yet: Views of the storm and its aftermath as seen from space. The animation above consists of false-color images from NASA's Terra and Aqua satellites. The island toward the bottom of the frame is Cyprus; southern Turkey is to the north. The false-color scheme in the animation is particularly effective at highlighting snow cover, which is seen in bright red and orange tones. Clouds appear white and in peach tones. The first image in the animation was captured on Dec. 8th, before the snowstorm. Some snow cover is evident in the mountains of Turkey. But there's none in the highlands of Cyprus. The second image comes from today (Dec. 14). The expansion of snow in Turkey is quite evident, and now the mountains of Cyprus have turned bright red, indicative of snow. (For a detailed explanation of this kind of false-color imagery and how scientists use it, see this post from NASA's MODIS web site.) The next animation shows the scene on the same days, but this time in natural color. 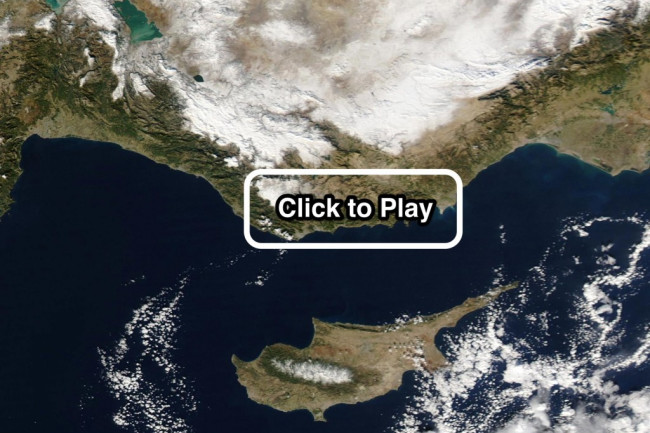 Click to watch an animation of natural-color satellite images from before and after the snow storm. (Images: NASA. Animation: Tom Yulsman) Once again, you can see snow cover expanding in Turkey. And today, the mountains of Cyprus are capped in white. In the next animation, you can see the storm swirling over the region. Egypt and Saudi Arabia are in the south, at the very bottom of the image. Turkey is about in the middle, with the Black Sea immediate to its north.

This visualization shows precipitation estimates based on data from a polar-orbiting satellite and infrared images from a Meteosat weather satellite. (Source: EUMETSAT) 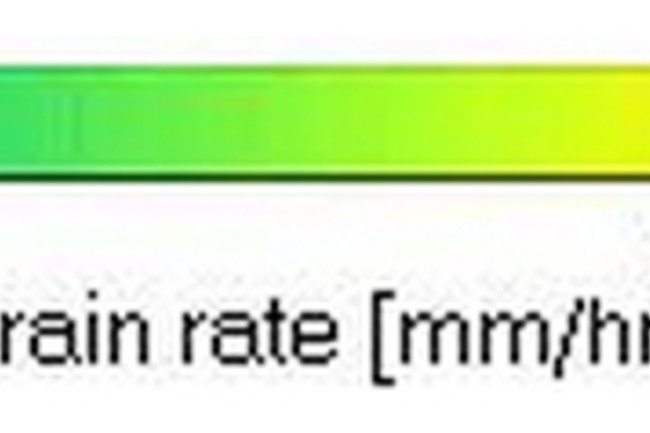 The animation is a little different from the others in that it provides an estimate of the rate of precipitation. The data come from microwave measurements taken by a polar-orbiting satellite and infrared imagery captured by the METEOSAT satellite. As seen in the animation, the highest rates of precipitation were over Israel, Palestine, Lebanon, and Syria.