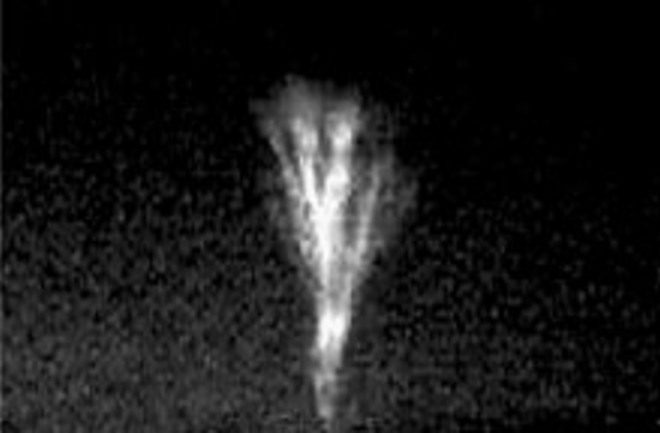 In a series of dramatic (if blurry) photographs, scientists have captured a rare type of lightning known as a "gigantic jet." These jets strike up from the thunderclouds instead of down from them towards the earth, according to findings published in Nature Geoscience. Catching the phenomenon on film has boosted scientists' understanding of the lightning.

, says lead author Steven Cummer. Capturing gigantic jets as they occur is difficult because they occur infrequently, and because scientists don't yet know which types of storms promote their formation. Cummer got his shot by luck. He had his cameras trained on the clouds brewed by the 2008 tropical storm Cristobal, hoping to spot another form of electrical discharge, when the jet blasted upward, reaching 40 miles into the upper atmosphere. Related Content: 80beats: A Fleet of Professional Storm Chasers Will Study Tornado Genesis 80beats: Lightning May Have Created Special Food for Earth’s Early Microbes DISCOVER: Juicing Up the Atmosphere has more on these strange jets DISCOVER: Where Lightning Strikes Image: Steven Cummer